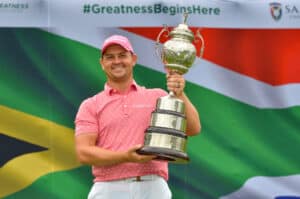 5 December 2021 – He spends a lot of time appearing emotionless, but Daniel van Tonder pumped his fist in delight on Sunday as he sank a 25-footer for birdie on the final hole of the South African Open Championship to snatch a one-stroke victory.

With Oliver Bekker chipping in three times in the final round at the Gary Player Country Club on his way to a closing 66 and a championship total of 15-under-par, Van Tonder had the kind of stroke of luck that is often needed to win a big title when his aggressive approach to the par-five 18th island green only just stayed out of the water. His chip from the fringe which should have taken him to tap-in distance ended up 25 feet short, and a play-off with Bekker was looming.

“As I stood over that putt, I remembered missing a short one at the end of the third round,” said Van Tonder. “So I said to myself, ‘watch this one go in!’ And it did!”

He couldn’t stop smiling after that as he celebrated the biggest victory of his life – perhaps not in rand terms with his R1.28-million share of the $500,000 purse, but it is certainly bigger than his win in the Kenya Savannah Classic in Nairobi in March on the European Tour.

“This is something I’ve dreamed about my whole life,” said Van Tonder. “I don’t think there is a South African kid who doesn’t want to see his name on this trophy for the second oldest national championship in the world.”

It took a superlative seven-under-par 65 for him to subdue the challenges posed by Bekker, Justin Harding, Hennie du Plessis who finished third, Dean Burmester who was fourth and CJ du Plessis who came home in fifth.

He started his chase for the title right from the get-go in the final round, making birdie on the first, and the, when Harding made a triple-bogey at the second after a shank with his approach, it was game on for those who had been four back of the lead and further before the final round.

Things looked to be going Bekker’s way as he chipped in for birdie on four and for eagle on five. That brought his total of chip-ins for the week to four. But Van Tonder just kept on pushing, and he made three birdies in four holes from the fifth to the eighth.

Bekker then duffed a chip on the putting green of the ninth for his third shot – but promptly chipped in once again to save par. Not to be outdone, Van Tonder had a chip-in birdie on the 10th, while Bekker made an easy birdie on 11.

Bekker was not done, however. There were two birdies in a row on 16 and 17 with long-range putts, and then he came within millimetres of making his 40-foot eagle-putt on 18 after a brave approach over the water. The tap-in birdie set the stage for Van Tonder’s heroics on the last.

For Van Tonder, the joy of being the fourth South African in a row to win the venerable trophy after Louis Oosthuizen, Branden Grace and Christiaan Bezuidenhout is going to make his Christmas celebrations sweeter than they would normally have been – and give his 2022 campaign a kickstart of substantial proportions.

The Freddie Tait Cup for the leading amateur was won by 18-year-old Yurav Premllal, who finished on two-under in a share of 30th, three shots ahead of fellow GolfRSA National Squad member Kieron van Wyk.