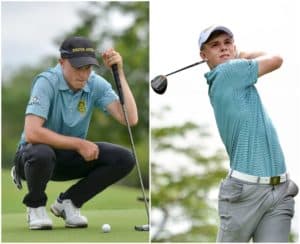 10 October 2019 – They didn’t quite hit the target they set for the team on day one, but the GolfRSA Proteas  were happy enough to kick off their All Africa Golf Team Championship title defence in Mauritius with a two-shot lead on Thursday.

“Although we didn’t achieve our goal of finishing below par, we were happy to walk off the course in the lead with a seven-over-par 221 team total,” said Vorster from Southern Cape.

“We teed off in a four-club wind that never let up and that made club selection really difficult. On some holes we had to take up to four clubs extra and it was especially tough off the tees and the shorter shots to gauge what club to take.

“Four of the first five holes were also straight into the wind and I was really happy to start with four straight pars. If you missed the fairway around here, you were stuck in the long grass and looking at a bogey or worse.

“I dropped a shot on the fifth and caught a flyer out of the penal grass on the seventh and had a double bogey. My goal for the back nine was to get back to level and I hit a great 9-iron into 11 and made my first birdie of the day. I picked up two more on 14 and 15 to go level, but unfortunately I three-putted the 18th.”

The newly-minted Ekurhuleni Open champion made a birdie start, and dropped shots on the second, fourth and eighth holes. He followed a fourth bogey with three birdies on the bounce from the 12th, but also let one slip on the final hole.

De Beer from Eastern Province offset five bogeys and a double at the par three eighth with two birdie pairs – six, seven, 13 and 14 – to finish three-over, while 16-year-old Duminy from Southern Cape went out in 40 and had 38 on his homeward loop.

“We definitely didn’t perform as well as we thought we would, but given the conditions we’ll take it and build on the two-shot lead,” Vorster said.

“The mood in the camp is upbeat. We are going into the second round with a positive mind-set and the determination to keep the ball in play. If we can reduce the bogeys, we’ll definitely post a better team total on Friday.”

Vorster and Schaper finished in a seven-way tie for first in the Individual Competition and shares the top spot with Nsubuga, Willard Mkhwanazi from Eswatini, Reunion’s Loic Heurtin, Samuel Njoroge from Kenya and Ayoub Id Omar from Morocco.

Othman Raouzi from Morocco carded 74 to finish eighth on his own, while De Beer and Cwinyaai finished in a tie for ninth with Elyes Barhoumi from Tunisia.