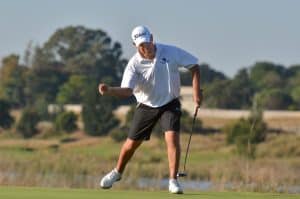 2 May 2019 – KwaZulu-Natal golfer Derek Scullard beat Shaun Stapleton with an eagle in extra time to defend his South African Mid-Amateur Championship title at the Ebotse Golf Estate and Country Club on Thursday.

The 40-year-old fired a final round one-under-par 71 to set the clubhouse target on two-over 218, but Stapleton birdied the closing hole for a 72 to tie, forcing Scullard into a sudden-death play-off.

The pair returned to the par four final hole, and this time, Scullard got the result he looked for in regulation play.

“I overcooked a 5-iron and couldn’t up-and-down for birdie in the final round, but this time my drive finished 15 yards shorter,” said the Mount Edgecombe golfer. “I hit a great drive down the middle and flushed a 5-iron at the flag. It ended about 12 foot from the hole.

“Stapes was a good position to make birdie, so I knew I needed to sink that eagle putt. It felt like pay-back when that putt dropped. I’m so pleased with this win, because this week was challenging and to come out on top again feels really, really good.” 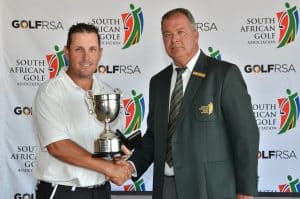 Scullard started the final day two off the pace behind former champion Neil Homann, and slipped even further back after a bogey-bogey start.

“I was surprised to drop two shots like, because those holes were not playing that difficult,” he said. “I kind of thought to myself ‘that’s me done for the tournament’ and then I loosened up and played the hole nicely.

“That’s when I decided to go after it. I birdied the fourth and the fifth holes to get back in the mix. I hit 2-iron off the tee at four and left myself a 20-footer for birdie and holed it. I hit a good tee shot at the par five and 4-iron in. The ball rolled just off the green, and I made a good up-and-down for birdie.”

Four pars to finish the outward loop saw Scullard start the back nine in a four-way tie for the lead on one-over with Homann, Stapleton and Mark Beattie.

Homann birdied the par-four 10th to edge in front, but Scullard reeled him in with a birdie at the par five 12th.

“I made some good par saves to keep the round going, but I was apprehensive when I got to 12,” he said. “That’s been my nemesis hole this week. I hit it in the water on both days; managed to make par on day one, but paid with a double bogey in round two.

“I felt that hole owed me something. I hit 4-iron off the tee and laid up with a 5-iron, but I went into the hazard. I had a decent lie halfway down the hill and hit a gap-wedge to 15 foot and drained the putt and that’s when things clicked into another gear. I was back to 2-over and I just kept it going with pars.” 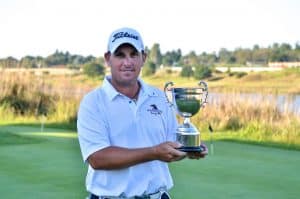 Scullard, the owner of Rockwood Cladding, was proud to survive one of the toughest tests of his mid-amateur career.

“It’s such a tough layout and mentally, it was probably toughest challenge of my career,” said the Hillcrest resident. “The greens are so different to what I usually play on. The ball spins and runs out, and that took some getting used to. With no placing and all the mounds and bunkers that come into play on the links layout, you really had to be striking the ball well.

“The rough was brutal, up to eight feet in places, and there was no room for mistakes. If you hit an errant tee shot, you paid heavily. And with no placing, the flat spots short of the greens were tough to negotiate when you had to chip.

“I was happy with my ball striking, but annoyed that I made too many silly drops. I need to tighten up on my game, because that could have cost me the win. Now that I’ve done it twice, I’m definitely going to gun for the hat-trick next year.”

Homann closed with a 75 to finish in third on four-over, and Beattie took fourth on five-over with a closing 73.