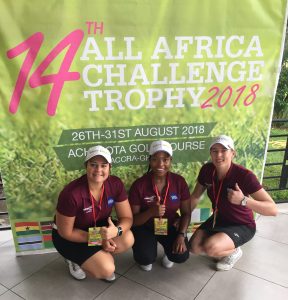 30 August 2018 – Casandra Hall and Zethu Myeki got South Africa’s title defence in the 14th All-Africa Challenge Trophy underway with a solid opening round at the Achimota Golf Club in Accra, Ghana on Wednesday.

Hall and Myeki combined for a first round six-over 150 to open up a 13-shot lead over Tanzania, while the host nation and Zimbabwe edged out Senegal for third place on 167.

The South African pair finished first and second respectively in the individual competition.

Sene Daba from Senegal and Madina Hussein from Tanzania tied for third on 81, while Lenanda van der Watt – the final member of Team South Africa – grabbed a share of fifth on 82 in her national debut alongside Hawa Wanyeche from Tanzania and Zimbabwe’s Batsirai Tilowakuti.

Myeki said the trio are savouring every moment at the prestigious biennial championship.

“The weather has been surprisingly chilly since we arrived in Ghana and we are thoroughly enjoying the championship and meeting players from all over Africa,” said the Randpark golfer.

“We had two practice rounds ahead of the tournament, but it’s a pretty challenging layout and you can see from the first round scores that everyone has some bad holes. There is a lot of trouble out there, especially the very thick rough and you are looking at bogey of you don’t keep it in play. We are very happy with the start we’ve made, but there is room for improvement.”