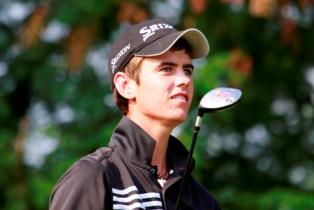 Although the rain abated, a wet Glendower Golf Club provided for testing conditions in today’s second round of the African Junior Golf Challenge. Only three of some of Africa’s best juniors managed to break par.

None of whom were from the host nation, but despite this South Africa managed to stretch their lead to eight shots after recording a two over par 218 team score. The best three scores in each team of four players counting in each round.

Namibia recorded the best second round team score, level par 216, this was fourteen shots better than their first round score. Although they moved ahead of Zimbabwe, into second place, they did not manage to reduce South Africa’s first round lead.

Scott Vincent, of Zimbabwe, provided further evidence of his exceptional talent when he managed to go around the challenging eighteen hole layout in 68, four under par. He now heads the individual leader board at the halfway mark, with a total of 142, two under par.

After a good showing at the end of the rain interrupted first round, Zimbabwe were only four shots off the pace in the team competition. However despite Vincent’s good showing, his team dropped down to third is the standings after a disappointing score of 228 today.

Charl du Preez (70), of Namibia, is one shot behind Vincent.

Brandon Stone is the leading South African, on the individual leader board, on 145, one over par. He had a disappointing 74 today which was not good enough to count for the team score. Haydn Porteous (72), Teagan Gauche (73) and Luke Jerling (73) were the three players to count.

The third round commences early tomorrow morning. The final round will be played on Thursday.

The team winning this competition will qualify to play in the Toyota World Junior Team Championship in Japan towards the middle of the year.