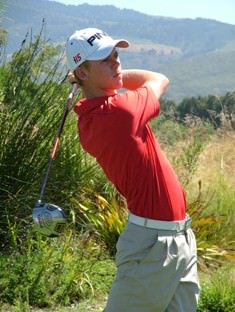 Rain is the order of the day of late in Gauteng, and today was no exception.

Only four of the ten teams, participating in the 72 hole stroke play African Junior Teams Challenge, managed to conclude their first round played at Glendower Golf Club, Bedfordview, Johannesburg.

Leading, but with a couple of holes still to play, are the four man team of South Africa. With the best three scores counting, the hosts were on level par. Brandon Stone was three under par, Luke Jerling was level par and Teaghan Gauche three over, being the best of the South Africans at that point.

Of the four teams that finished Namibia were the leaders in the clubhouse with a first round team score of 230, fourteen over par.

The players will conclude their first round starting early tomorrow morning.

“We will start the second round as soon as we can after the conclusion of the first round,” said Ann Rycraft, president of the South African Golf Foundation. This is in attempt to get as much golf in before the predicted afternoon rains descend upon the saturated but nonetheless pristine golf course

This event is a qualifying tournament for the World Junior Teams Championship that will take place towards the middle of the year in Japan. In all fourteen teams from all over the world will qualify to play in the final.

The final round will be played on Thursday.

(A full first round report will be provided tomorrow).