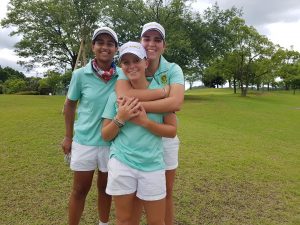 12 June 2018 – Both South African teams will have to regroup after a disappointing start in the 2018 Toyota Junior Golf World Cup, supported by JAL, in Japan.

Spain team lit up the Ishino Course at Chukyo Golf Club to lead the Boys Division by two shots on 10-under 203, while Japan opened up a four-shot lead on eight-under 136 in the Girls Competition on Monday.

The GolfRSA Girls combined for an opening six-over 150, while the GolfRSA Boys placed 10th and trail the leaders by 12 shots.

Eighty-seven of the world’s best junior golfers descended on Toyota City in Aichi-Prefecture to start the 26th edition of the prestigious event. The Boys Competition features 15 teams and nine teams lined up in the fifth consecutive playing of the Girls Competition. 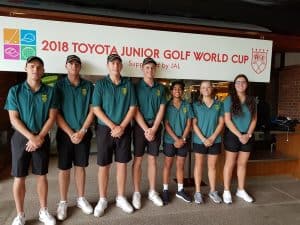 The GolfRSA Girls and Boys teams qualified for the Toyota Junior Golf World Cup, supported by JAL, by virtue of a double victory in the All-Africa Junior Golf Challenge in Morocco in March

The GolfRSA Girls and Boys teams qualified by virtue of a double victory in the All-Africa Junior Golf Challenge in Morocco in March.

Kajal Mistry and Symone Henriques made a return trip to Japan and the Gauteng duo anchored the team with a pair of three-over-par 75s. New cap Caitlyn Macnab from Ekurhuleni posted a non-counting 78.

Henriques hooked her second shot into the bunker at 10, but she wiped out the bogey start with three birdies on the bounce from the second hole.

“I bogeyed 14, made a stupid double at the short hole (15) and dropped another shot at 16, but I recovered with a birdie at 17 to turn one-over,” said the Glenvista golfer, who rallied with another birdie at the par-five sixth after starting her back nine with a double bogey at the first and bogey at the second.

Mistry erased a bogey-bogey start with birdies at 16 and six, but she surrendered another shot at 18 and had a double bogey at the par four fifth on her back nine.

“It was really tricky out there because the course played a lot longer than in the Am-Am on Saturday and the practice round on Sunday in the strong, swirling wind,” said the former Sanlam SA Women’s Amateur champion, who finished second overall in the Individual Competition last year.

“There is a big, tall tree in the fairway at the fifth and I hit it straight behind it. I couldn’t do anything with that and ended up three-putting the hole for a double. Otherwise it was steady. I birdied two of the par fives, but I had soft bogeys at three holes where I couldn’t up-and-down for par.”

“I started with three bogeys and had a double at 14, but managed to par my way to the turn,” said the Serengeti golfer. “After the bogey at the first, I sunk a nice putt for my only birdie at the second and played steadily until the last hole, where I gave back another shot.

“It was a bad ball striking day and the putts just wouldn’t drop. I’m heading to the driving range after lunch to try and sort things out and hopefully I’ll smash it in the second round.”

The GolfRSA Boys were lying third through the turn, but faltered over the last nine holes to tie for 10th with Italy and Morocco.

“It was a challenging day for the whole team,” said Vorster from Southern Cape, who fired five birdies.

“We all started well, but let it go on the back nine. I hit 9-iron into the second and boxed a seven metre putt for birdie. At the third, I hit a perfect drive. I had 126 metres in and hit a soft pitching wedge to give for another birdie.”

He cancelled a bogey at seven with a birdie at nine to turn two under. A triple at 10 and bogey at 11 cost him three shots, but Vorster got it back to level with gains at 12 and 17.

“I hit it just over the bunker on the right at 10,” said the Louis Oosthuizen Junior Golf Academy member. “I was in thick grass and facing an uphill shot into the wind from 103 metres. I gripped down on a gap-wedge to hit a three-quarter shot, but it came out hard and I caught a flier. The ball pitched five metres over the green, hit the car-path and shot out of bounds.

“It wasn’t the start we were hoping for, but we remain positive. Every guy on the team is aiming for sub-par rounds on Tuesday to get ourselves back in the competition.”

Deyzel from Gauteng North cancelled a bogey start with a birdie at the second and turned two-under with further gains at six and seven.

“I three-putted from 10 metres at 12, had a double at 13 after I finished against one of the little islands in the bunker and dropped another shot at 15,” said the Woodhill golfer. “I hit 3-wood down 18 and gap-wedge to nine metres and drained the putt for birdie, which was a really nice way to finish a frustrating back nine.”

Fellow Western Province golfer Senger made a trio of birdies over the first nine holes and had one bogey, but the Durbanville golfer had four bogeys on the trot after the turn and dropped further shots at 15 and 18.