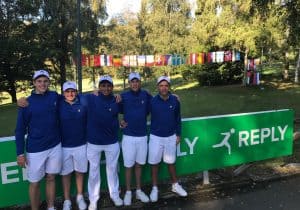 2 September 2018 – Defending champion Martin Vorster is savouring his third consecutive start alongside four of South Africa’s rising junior talents in the 12th Reply Italian International Under-16 Championship, which tees off on Tuesday.

The Southern Cape junior will line up at the Biella Golf Club Le Betulle alongside Casey Jarvis and Yurav Premlall from Ekurhuleni, Samuel Simpson from Western Province and Central Gauteng’s Kian Rose.

Vorster, the first double champion of the prestigious international event, went wire-to-wire in The Junior Open at St Andrews in July and is hoping to make it three in a row this week.

“I am very grateful that GolfRSA has given me another stab at the title,” said Vorster.

“This is a fantastic tournament, because we compete against top juniors from all over the world at a fantastic venue. The standard of the competition is really high and playing in this tournament has been a huge learning curve in my career.

“This course is incredibly tough. Knowing the layout and where to hit the ball played a huge role in winning it last year and I’m excited to have another chance. It won’t be easy to go back-to-back given the strength of the field, but I’m definitely going to try.”

The juniors will challenge for the Teodoro Soldati Trophy in the 72-hole Individual Competition.

Vorster will also team up with Jarvis and Simpson in the 36-hole Team Competition that is played concurrent with the first two rounds.

Jarvis won the English Boys Under-14 Open Amateur Stroke Play Championship at Manchester Golf Club last year and has arrived in Italy with some red-hot form.

The State Mines junior won both the Nomads SA Boys U-15 and U-17 titles this season and in August, the 15-old eclipsed the leaders in the final round of the Africa Junior Open at the Fish River Resort to claim his first victory on the Sunshine Tour Junior Series.

Simpson, who come close to the winner’s circle three times, also enjoyed his first national success on the Sunshine Tour Junior Series when he lifted the Tshwane Junior Open title at Irene Country Club in May.

“The players had their first look at the course on Sunday and it was good to see them excited after the practice round,” said Younge. “The region had a drought that lasted a few months and then some heavy rain in the last month, which has affected the condition of the course.

“They will have placing for the tournament as there are some bare patches, but the greens are firm and running very nicely. The course will be playing very long, but the players were very happy with the overall condition and feel that there are some scoring opportunities out there.

“We will be heading back to the course for a second practice round on Monday. The players are enjoying the experience so far and the opportunity to gain international experience at a top rated European golf course. This will be a stern test for our youngsters and they are very excited to get the tournament underway.”

NOTE – Live scoring will activate on 4 September on https://www.golfclubbiella.com