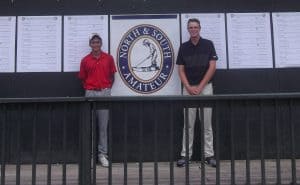 3 July 2018 – South African juniors Deon Germishuys and Nikhil Gopal are in a great position heading into today’s second round of the Junior North and South after an impressive start on day one of the prestigious event at Pinehurst Resort on Monday.

The Bridge Fund Manager Junior Series finalists coped well with the hot and humid conditions in the opening round at Pinehurst Number 8.

Germishuys from Western Province made the most of the sunny weather to post a three-under-par 69. The reigning Sanlam SA Amateur champion fired four birdies, but bogeyed the final hole to finish one shot behind the joint leaders Holden Grigg and Trent Tipton.

Gopal from KwaZulu-Natal broke into the top 10 with a level par round.

“There was very little wind to speak of and that made it slightly easier to attack some of the pins,” said 18-year-old Germishuys from Strand.

“I started with three pars and made my first birdie at the fourth. I hit it straight down the middle and found my ball in a divot. I got it out and hit it to four metres and made the putt. At the fifth, a par three, I holed a five-metre putt for another birdie.

“I laid up after a good drive at the sixth and had 65 metres flag. I pitched it a foot from the hole and made it three birdies in a row. From there it was straight pars all the way to 17. I hit driver, 6-iron on the green and two-putted for my fourth birdie.

“At the last hole, I wanted to hit my usual fade, but the ball stayed straight. I flew the water, but the ball pitched on the slope and rolled back into the water. Wasn’t the finish I hoped for, but I’m heading to the tough Number 2 course within a shot of leaders, so I’ll take it.”

Gopal amended for bogeys at the fourth and 10th holes with a birdie-birdie finish.

“It wasn’t a bad day, but it wasn’t particularly exciting,” said the 17-year-old from Victoria Country Club. “I hit a lot of greens but I just didn’t make any putts. I find the Bermuda greens really hard to read. Nothing really happened until the last two holes.

“I hit a good drive down 17 and had 2-iron in, but I couldn’t play my usual shot. I had to cut the ball to stay clear of the trees on the right. I left it half-a-metre short of the green, putted to two foot and tidied up for my first birdie.

“The 18th hole is considered one of the harder holes at Number 8. I hit a great drive down the middle and stuck a 9-iron close. And made my second birdie with my first proper putt of the day. It was a little boring, but I’m pleased to be in the top 10.”

Gopal said the juniors are both a little wary of the legendary Pinehurst 2, which hosted the 2014 U.S Men and Women’s Opens.

“This course is rated 18th in the world and it’s the number one course out of 600 tracks in North Carolina,” he said. “We only drove around the course because we couldn’t get a practice round, but from what we saw, the greens are slick and fast.

“It’s the kind of course that will bite you if you make the slightest mistake. You have to be accurate off the tees to score and you have to show this course the respect it deserves.”