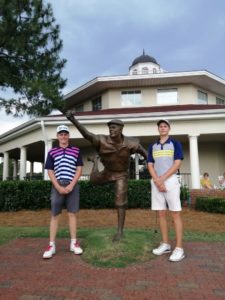 PINEHURST, North Carolina (3 July 2019) – South African junior Ryan van Velzen surged into the top three in the prestigious Junior North and South Championship in the United States with the low round honours at Pinehurst No 2 while compatriot Tyran Snyders retained his overnight lead on Tuesday.

Van Velzen made a battling start in the 41st edition of the top ranked US junior event with a two-over 74 at Pinehurst No 8, but the Benoni golfer hit his stride when action moved to the famed No 2.

The 17-year-old from Benoni racked up five birdies on his way to a two-under 68.

Van Velzen gained 19 spots on the field with the only sub-par round of the day and will start the final round in joint third on level par.

Snyders shot to the top of the leaderboard with an opening five-under 67 at the Centennial Course and held on to pole position with a level-par 70 in round two. The 18-year-old from Paarl will carry a two-shot lead over American junior Jolo Magcalayo into the final round at the No 8 course.

Playing the famed layout where the late Payne Stewart (1999), Michael Campbell (2005) and Martin Kaymer (2014) all won their US Open titles was a huge moment for both juniors, who secured their berths the line-up at Pinehurst through the popular Bridge Fund Managers Junior Series.

“It was quite intimidating to stand on the first tee of No 2,” Snyders said.

“I was pretty excited because you’re about to play this iconic course you’ve seen it so many times on the television. I needed a moment to take it all in. Luckily it’s pretty short and you can hit iron off the tee, which made it a bit easier.”

The Western Province golfer mixed birdies at two, five and seven with a trio of bogeys to turn level and he was two-over after dropping shots at 12 and 13, but he finished strongly with birdies at the 17th and 18th.

“After dropping 12 and 13, I hit two great shots at 14 and made a solid par to settle down. I hit my tee shot a bit right at 17 and drained a 40-footer with a big right to left swing for birdie. My tee shot at 18 went down the middle of the fairway. I hit a soft gap-wedge to five foot and made the birdie putt.
“It wasn’t the best ball striking day and I only hit my fourth fairway for the round at the 11th hole, but my short irons and wedges were on song and the putter did the rest.”

Van Velzen – who won the Triad Chapter one-day junior event on Tarheel Youth Golf Association circuit ahead of the Junior North and South – was delighted to be in contention going into the final day.

“I didn’t have the greatest day with the flat stick, but I hit the ball really well and that was the difference between the first and second rounds,” he said.

After missing a couple of short birdie putts early on, Van Velzen bogeyed eight, but bounced back with a birdie on nine to turn one-under. On the homeward loop, he reversed drops on 12 and 15 with gains at 13 and 16 and made a big putt on the closing hole for his 68.

“I had a near-miss at 10, a dogleg left par five, and I missed a five-footer for birdie at 11. I drove it in the waste area at 12, hit a gap-wedge just passed the hole and three-putted for bogey. I bounced back with a birdie at the short par four.

“At the next hole, a long par four, I hit a drive down the middle, a wedge to three foot and pulled the birdie putt. My tee shot at 15 just ran off the raised green and a three-putted, but again, I bounced back with a birdie after hitting my best shot of the day.

“The 16th is a long par four that usually plays as a par five. My driver finished just off the fairway, and I hit a 7-iron to two foot for a tap-in birdie. On the last hole, I hit a perfect drive down the middle and pitched it just short of the front flag. It spun back off the green and I hit a perfect chip into the middle of the cup for birdie.

“It was really exciting to play the No 2 with all its rich history. I was a little nervous to start, so I’m really pleased that I did myself proud on such a celebrated course. Looking forward to the last round and hopefully the putter comes to the party.”