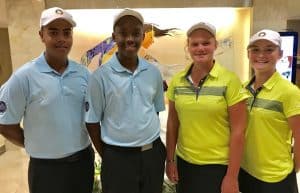 7 June 2018 – Kiera Floyd moved to third in the second round of the Girls B-Division in the Himbara World Junior Golf Championships, presented by Ciputra, and Rori Nkosi maintained a top five position in the Boys B-Division at Damai Golf Indah in Jakarta on Thursday.

For a second successive day, the two 13-year-old South Africans played target golf, but the teens are still struggling to get the birdie putts in the hole.

Floyd made 12 straight pars before her first birdie putt dropped at the par five 13th. She mixed two bogeys with pars at 14, 16 and 18 for a one-over-par 73. The Ekurhuleni golfer is seven off the pace from Thai golfer Phannarai Meesom-Us, the only player in the Girls B-Division to finish in red numbers. Meesom-Us leads the 13-14 age group on three-under.

Nkosi also racked up a string of pars, but the North West junior couldn’t counter a single bogey putt on his card. He signed for an 81 to finish in fifth spot on 233. Sean Lee from Singapore put together rounds of 72, 76 and 75 to top the Boys B-Division leaderboard on seven-over 223.

Jordan Rothman, who led the first round in the Girls A-Division on three-under 69, showed incredible fighting spirit to overcome a midway wobble. The Durbanville golfer was level through eight holes with birdies at four and six, but she turned three over after a big seven at the par five ninth.

Rothman regrouped quickly and made five straight pars to start the journey home.

The 15-year-old dropped another shot at 15, but made three solid pars over the closing holes to sign for a 77 that netted her a share of third on two-over 146. Her playing partner Hannah Reeves posted a 69 to vault to top the 15-17 age group standings on four-under 140.

The final South African junior in the mix at the Pantal Indah Kapuk course, Keyan Loubser from Western Province, posted an 82 to tie for 26th in the Boys A-Division (15-17 age group).

Rothman and Floyd slipped to third in the Girls Team Championship. The pair finished on 294 and trail Thailand by six shots. Singapore leads the Boys Team standings on 446, with Loubser and Nkosi well back in ninth spot on 478.

“This week has been a huge learning curve for all of us, but we wouldn’t change a thing, except maybe our strategy at the start of the tournament,” said Nkosi.

“We all arrived wanting to shoot 10 under par. The winning scores in past years have been one or two under. We realised that our expectations were unrealistic soon enough. It’s not just a course that is very challenging with trouble everywhere. The heat and humidity is a huge factor and it’s a pity that we just got used to the conditions and we’re almost leaving.

“It’s been amazing to compete against top juniors from all over the world and we all want to improve on our individual scores in Friday’s final round. We want to finish the championship on a high note. It has been an incredible experience for all of us. It’s a trip we will always treasure.”

Look for the TEE TIMES & LIVE SCORING LINK AT   www.jakartaWorldjuniorgolf.com