SA Juniors edge up the leaderboard in Japan 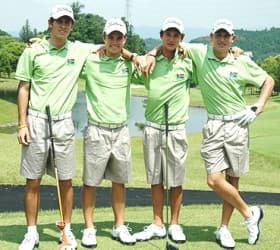 A slightly better performance by the South African junior amateur golf team in the second round of the Toyota World Junior Team Championships moves them up one place, to tenth overall on the team leaderboard.

With the best three scores counting, in each team of four players, the South African’s recorded a second round of 211, two under par, three shots better than yesterday. They now have a 36 hole total of 425, one under par.

The 72 hole international under 18 team competition is being played at the Chukyo Golf Club, on the Ishino Course, in what is known as Toyota City just outside Nagoya, Japan. 16 countries in total are competiting.

England are leading the team event with a 36 hole total of 414, twelve under par. They had a very successful round today. All four of their players recorded rounds under par, two with 67s and one with a 68 counted, recording the best team score of the day, 202, eleven under par. This was three shots better than the next best performing team score, that of Denmark.

Overnight leaders Sweden dropped back to second place with a 36 hole score of 419, nine under par, along with Denmark.

In the individual competition Bud Cauley of the US leads with a 36 hole total of 135, seven under par.

Andre de Decker, of Westlake Golf Club, and Dylan Frittelli, of Irene Golf Club, are the two best performing South Africans. They are tied in twelfth place on 140, two under par.

The best round of the day was that of Australian Brian Macpherson. Andre de Decker recorded South Africa’s best round, a three under par 68. “He could have gone lower,” said Ann Rycraft, South African Junior Golf Foundation President and team manager after his round. “Two eagle putts, on hole 9 and 18, lipped out,” she explained. De Decker did record one eagle, on the 12th hole.

Frittelli, team captain, shot a 70 today, with Leon-Brink Knoll recording a 74 and JG Claasen a 73.

Tomorrow, the penultimate round takes place in the four day competition.