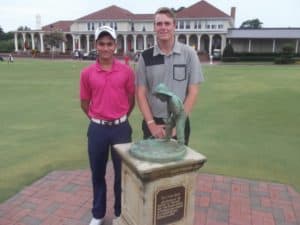 Bridge Fund Managers Junior Series finalists Nikhil Gopal and Deon Germishuys in front the clubhouse at Pinehurst during the final round of the Junior North and South Championship; credit GolfRSA.

Germishuys enjoyed his first success on American soil in the eight Grandover Junior Amateur and started the invitation-only event at Pinehurst Resort with some great form.

The Ernie Els and Fancourt Foundation member from Western Province opened with a 69 at the Number 8 course and a second round 74 at the Number 2 course saw him head into the final round three off the pace.

He closed with a one-over-par 73 and finished on two-over 216, three shots behind local golfer Tyler Jones. The American junior was the only player from the starting field of 90 competitors to end the tournament with a sub-par score after rounds of 70, 71 and 72.

“I was disappointed with fourth place,” said 18-year-old Germishuys, who plays out of Strand Golf Club. “I struck the ball incredibly well, but I just putted poorly.

“At the first hole, I stuck it to three metres, and three-putted for bogey. I made another drop at four, but I managed to get it back to level with birdies at five and six. I holed two long putts, and I thought I’d turn a corner, but another three-putt from three metres at eight.

“My next bogey was a three-putt at 14 from five metres. I kept the card clean coming home and at least I redeemed myself with a birdie finish. I hit a good drive and stuck a 9-iron two metres from the hole and boxed the putt.

“It was an incredible honour to compete in this tournament and I will be forever grateful to Bridge Fund Managers. The chance to play here at Pinehurst was awesome. I think that if St Andrews is the Holy Grail of Golf, then Pinehurst comes a close second.”

Gopal from KwaZulu-Natal shot successive rounds of 72 at Number 8 and Number 2 and closed with a 79 at Number 8 to tie for 18th on nine-over.

The Victory Country Club golfer was upbeat about the experience.

“I was disappointed that I slipped out of the top 10, but you have to look at the big picture,” said 17-year-old Gopal. “This was a once in a lifetime opportunity and withhout a doubt the best golfing experience of my life.

“It was such a privilege to play at Pinehurst and to compete against the cream of US junior golf. Deon and I both learned from this experience and we both found positives and negatives to take home.

“We’re super excited that we get to play some more golf at the Magnolia Course at Pinewild Country Club, where the guys qualified for the US Open. This has been a wild ride and Deon and I owe Bridge Fund Managers and the other sponsors of the series a huge debt of gratitude for this opportunity.”