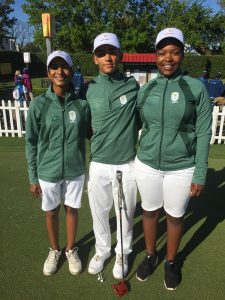 BUENOS AIRES, Argentina (12 October 2018) – They didn’t come close to the goals they had set for themselves, but despite a disappointing start in Buenos Aires, GolfRSA Cole Stevens and Kaiyuree Moodley were excited about the experience gained in the Individual Golf Competition at the 2018 Youth Olympics in Argentina.

While Australians Karl Vilips and Grace Kim celebrated a golden double in the cold and wet conditions on the last day at Hurlingham Golf Club, the South African duo struggled to the finish line in the Boys and Girls Competitions.

“Kai and I both aimed for top 10 finishes and we both came up short,” said Stevens. “We set our expectations too high and we were both bitterly disappointed, but when we talked it through after the round, we realised that the chance to compete against the best juniors in the world was amazing and the experience outweighed the disappointment one hundred fold.

“I was excited to start the final round after a much better second round, but the final round was a train wreck. The wind was pumping and my putter was colder than the weather. I started with seven straight pars, but I couldn’t convert any of my birdie chances. 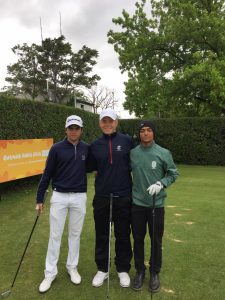 “It definitely wasn’t the final round I hoped for, but I learned a lot. You can’t compete at this level without an A-game, and I wasn’t at my best. I battled with chipping and putting and on the final day, I let myself down with the driver.

“On the positive side, it was fantastic to play against top juniors and a golf course that is so different from anything we play at home. The course is incredibly tight and the greens are really small and play hard and fast. It was a challenge to try and figure out how to score on the course. We both look forward to the Team Competition to try to put into practice what we learned this week.”

Moodley was equally inspired after playing the back nine on the last day in level par. 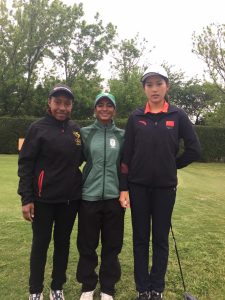 “I was six over through the first 11 holes, but I made six straight pars and finished with a birdie,” said the 17-year-old Bryanston golfer. “The highlights of this week was the birdies I made at the seventh in round one, the second in round two and the last hole in the final round.

“It’s such a tricky closing hole; a dog-leg left par four. It’s quite a tough tee shot, but I drove it on the fairway and left myself half a sand-wedge in. I stuck it to 15 foot and holed the putt.”

“We went up against juniors that are the best players in their countries and we both got a good idea where we stand. In a way, it was a wake-up call. We were both outside our comfort zone on this golf course and it was challenging to learn and compete at the same time.

“Cole and I both had some highs and lows, but we are not going to dwell on the negatives. We are both feeling positive ahead of the Team Competition and determined to put up a really good fight.”

Thirty-two nations will compete in the 54-hole Team Competition from 13-15 October.