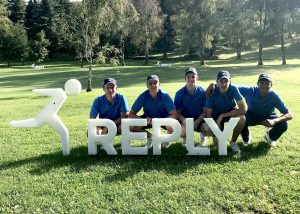 Simpson got off to a birdie start and fired a trio of birdies from the 16th hole to turn four-under and cancelled a lone bogey at the fifth for another gain at seven for a four-under 69.

The 16-year-old Bellville golfer is fourth overall on three-under and will start the third round three shots behind English pacesetter Max Hopkins, who leads the field on six-under 140. Italy’s Giancarlo Sari is second on 141 and English junior Conor Gough a further shot adrift.

Casey Jarvis, a double Nomads SA Boys champion this season with victories in the U-15 and U-17 Championships, carded rounds of 72 and 75 to tie for ninth

Defending champion Martin Vorster and Rose share 13th on three-over with two Italian juniors and Yurav Premlall finished in a four-way tie for 17th on four-under.

“The conditions were sunny and warm and the course set-up definitely wasn’t too long, but our guys struggled compared to the first round and back-pedalled a bit,” Younge said.

“Sam was rock solid from tee to green all the way and pretty much played stress-free golf. Martin was great of the tee, but his irons let him down. He also three-putted for double at the third – his 12th hole – and that gave him a bit of a knock.

“Casey fought back nicely after a couple of bogeys on his front nine, but then he made a silly double from the greenside bunker, also at the third. He got the shots back though, with birdies at five and six to complete the last nine holes in level par.

“Yurav was very disappointed after he followed a birdie at the first hole with quad on the second – his 11th hole – followed by two bogeys for a 78. This after he eagled the 11th and turned level par. And “Kian was upset when he lost a ball that went straight down the middle of the fairway at the sixth. It disappeared from nowhere and cost him three shots. Two more loose swings were expensive, too but both players shook it off and they are ready to fire on Friday.

“Our aim for the first two days was to make the cut and I’m really pleased that all five boys still have a stab at the title. With two rounds on Friday, their discipline and golf fitness will definitely benefit them and anything can still happen.”