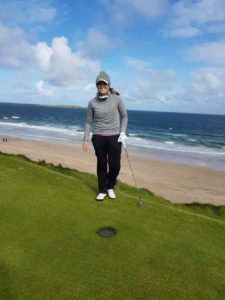 12 September 2019 – The majority of the international field – including GolfRSA Junior Proteas Sam Simpson and Caitlyn Macnab – backpedalled in the second round of the 2019 Duke of York Young Champions Trophy on another punishing day at Royal Portrush Golf Club.

Simpson posted a frustrating 13-over-par 85 and slipped out of the top five to joint 16th while Macnab carded 88 in the 4-club wind to finish in a tie for 49th.

“The Irish Coast has been hit by this merger between the remnants of Hurricane Dorian and Tropical Storm Gabrielle and the local members here have been saying it’s the worst weather that they have seen in years,” said Womens Golf South Africa President Sally Greasley.

“One really has to feel for the juniors, especially those coming from outside Great Britain and Ireland who have had to deal with gale force winds and driving rain for two days at what is arguably one of the toughest links courses in Ireland

“The course is incredibly tight and every tee shot really has to be perfect. Sam and Caitlyn have been hitting the ball well, but the greens have been their undoing. They are firm and fast and it’s nearly impossible to stop the ball on the greens. Their lack of experience on true links courses is showing.”

The South African pair had hoped to make the most of an early start, but the wind was already blowing when they stepped up to the first tee.

“Caitlyn made a disappointing three-putt bogey start and on the second hole her approach shot sped off the green into a hollow. She chipped it close and managed to save par,” Greasley commented.

“On the short third, her tee shot ran through the green. She pushed a very long putt past the hole and her par-putt lipped out. “She also bogeyed the fourth, but made two good pars on the fifth and sixth holes. The wind was straight into the players on the seventh. Her drive went long and finished in the thick, wet rough and ended up costing her another shot.”

Macnab saved par on the eighth, but had a lost ball on the ninth, resulting in a triple bogey.

“People always say Royal Portrush brings you to your knees. I haven’t shot 88 or anything close to that in at least three years, so I have definitely been brought to my knees.

“This course leaves you absolutely no room for error and with the wind, it’s been a frustrating couple of days. The wind was so strong that it blew my trolley quite a few times and I had to step away from putts on at least five occasions when the wind blew me off my feet.

“Some holes on this course are so tight that you have just a couple of yards to work with. At the fourth hole, for instance, the area where we have to land our tee shots was just four paces from the edge of the fairway to the out of bounds. The fifth has a long green, approximately 45 metres, and the area between the back of the green and the out of bounds is maybe four paces and with a back pin, it’s a very intimidating hole.

“The guys who grew up on links golf are making a much better fist of it than the rest of us. The guy I played with, Jack McDonald from Scotland, said it was just a normal day back home and shot 74 while I was breaking my back to make pars. It definitely has not been much fun, but rather one long learning curve. Off the course we are having a great time, meeting players from all over the world and making new friends, though, so that kind of takes the sting out of it a bit.” 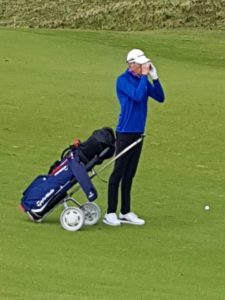 Simpson was two-under through four holes when the first squall hit.

“It was almost impossible to stand and the driving rain was straight into the players on the fifth tee,” said Greasley. “Sam lost his grip on the tee shot and the ball veered out of bounds right. His provisional was good, and he hit a great shot, but unfortunately the putt lipped the flag and he was back to level. He tripled the seventh after another lost ball and bogeyed the eighth to turn four-over.”

Simpson’s woes continued on the back nine as he dropped shots on 10 and 15, and wedged a triple bogey between double bogeys on 12 and 14.

“I really struggled to keep the ball in play on the back nine, but I was pleased the par the last three holes coming in with the wind straight into us again,” said the reigning Nomads SA Boys Under-19 Stroke Play champion.

“The course is incredibly challenging, but I have also been struggling with my game. That’s golf, though, and we all go through our up and our down stretches. It’s just very tough to come to a course like Royal Portrush with a B-game, because this course really demands perfection. Every par I made on Wednesday felt like an eagle.

“I don’t expect to miraculously go low in today’s final round, but I am going to do my level best to keep it in play and to at least avoid double and triple bogeys.”

Englishman Conor Gough shared the first round lead on one-over with compatriot Callum Macfie and posted a second round 75 to hold on to pole position on four-over 148. The reigning English Men’s Amateur champion leads by five shots from Italy’s Matteo Christoni and Dylan Thomas from Wales.