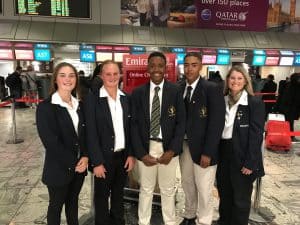 2 June 2018 – Four of South Africa’s rising junior talents have left for Indonesia to fly the flag for the country in the Himbara World Junior Golf Championships, presented by Ciputra.

Western Province’s Jordan Rothman and Kiera Floyd from Ekurhuleni will compete in the Girls Division, while Rorisang Nkosi from North West and Western Province’s Keyan Loubser will line up in the Boys Division at the Pantal Indah Kapuk Course of the Damai Indah Golf Club in Jakarta from 5 – 8 June 2018.

Womens Golf South Africa (WGSA) Vice President Sarah Braude accompanied the quartet to the 24th edition of the world amateur golf ranking event that celebrates the anniversary of the founding of the nation’s capital.

Floyd, who plays off a plus-1 handicap, will compete in the Class B Division for 13 to 14-year-olds with handicaps of 15 or lower.

Rothman lit up the golfing radar last year when she dispatched former number one Kajal Mistry in the first round of the 2017 Sanlam SA Women’s Amateur Championship.

The 15-year-old from Durbanville Golf Club rose to prominence again when she won the seeding round for the 2017 SA Women’s Inter-Provincial and helped Western Province to victory at Mossel Bay Golf Club.

Rothman, who plays off one, has steadily climbed the WGSA Junior Rankings to eighth this season and will start in the Class A Division in the 15-17 age group for handicaps 11 and lower. 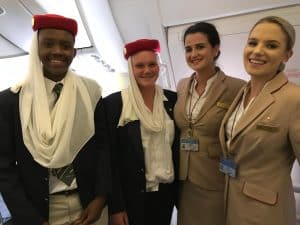 Floyd and Rothman also made a huge statement when they upstaged the country’s top junior boys on the 2018 Bridge Fund Manager Junior Series. Floyd qualified for North Final of the popular junior golf development series when she fired a five-under-par 67 at the East Course to win the RJK event, while Rothman took third at her home course to book a berth for the South Final.

South African Golf Development Board (SADGB) duo Nkosi and Loubser will compete in the 13-14 age group and 15-17 age group respectively.

Nkosi anchored North West in the final round of the Nomads SA Under-13 Championship at Port Elizabeth Golf Club last year. He closed with an even-par 72 to help North West to a runner-up finish and sealed a tie for sixth in the overall individual standings.

Earlier this season, the plus-1 handicapper from Pecanwood Golf and Country Club tied for third in the Nomads SA Boys Under-15 Championship at Kingswood.

Seventeen-year-old Loubser from Bellville, who plays off a 2-handicap, enjoyed top 20 finishes in the WP Parow and King David Mowbray Junior Opens in recent months and took sixth overall in the Bridge Fund Managers Junior Series South Final, having qualified in Port Elizabeth in January.

“WGSA have been invited to send four juniors to compete in this championship for a number of years and we usually pick two juniors and offer the other two spots to the SAGDB,” said Braude. “We are very grateful to the tournament organisers and sponsors for the opportunity to bring our juniors to this world-class event again.

“The greatest value of the trip is taking the juniors out of their comfort zone with the culture, the weather and food and exposing them to a highly competitive international field and a magnificent championship golf course. You can’t put a price tag on this experience and it will definitely serve them well in the future.”

In addition to the Individual Championship, the championship also features a team event. Team are comprised one player each from Class A and Class B in the Boys and Girls Competitions.