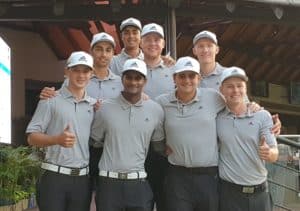 Ekurhuleni is one match away from a historic first A-Section victory in the 59th South African Inter-Provincial Tournament, sponsored by Tempest Car Hire, at Mbombela Golf Club.

MBOMBELA, 19 September 2019 – The calculators came out in force as action wrapped up on day four of the 59th South African Inter-Provincial Tournament, sponsored by Tempest Car Hire, at Mbombela Golf Club.

Ekurhuleni routed Western Province 8 – 4 to edge even closer to a historic first A-Section win, but with Southern Cape not out of the running and Gauteng North still with a chance, the log leaders are not out of the woods yet.

“There won’t be any early celebrations in our camp,” cautioned Ekurhuleni manager Hugo Delport.

“Gauteng North edged Central Gauteng 6.5 – 5.5 to move to third on the log with 5 points and 24.5 game points. The Daisies will go out guns blazing in their final match against Western Province to get the win and boost their games points.

“Southern Cape will be going exactly the same in case we get beaten by KwaZulu-Natal and it goes to a count-out. But our guys know what is at stake. They were down in the foursomes against Western Province but they turned it around to lead 3 – 1 and they pushed it through in the singles.”

“We know there are no easy games at this level and no-one is going to do us any favours. We are taking nothing for granted and we’ll approach our final match exactly the same way as we have played all week.” 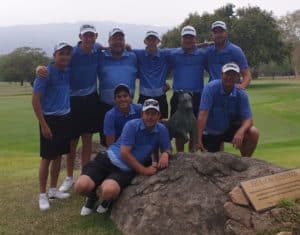 North West strengthened their title bid in the B-Section with a decisive 7.5 – 4.5 victory over Boland on day four of the 59th South African Inter-Provincial Tournament, sponsored by Tempest Car Hire, at Mbombela Golf Club.

B-SECTION
The battle for promotion in the B-Section is heading for a major showdown between North West, Free State and Boland.

North West took down Boland 7.5 – 4.5 to move into the number one spot in the standings with 7 points, however, Free State also moved to 7 points after a narrow 6.5 – 5.5 win against Eastern Province.

North West started the afternoon session on the front foot with a 2.5 – 1.5 lead.

Beyers Smith kept the momentum with a 7 & 5 win, and the skipper was backed by Nash de Klerk and Liam van Deventer, who both won their games 2 & 1.

“Ollie (Goldhill) halved to take us to 6 points and our stalwart Johan Krugel at number eight sealed it with his 1-up win on the 18th,” said North West manager Peet van Schalkwyk.

“It was just a fantastic feeling for the guys to wait behind the 18th green for our number one Rigardt Albertse, knowing that we had the win in the bag. He managed to square his game, and that half point could make a world of difference on Friday.

“We lost the SA Country Districts on game points, so the boys knew the score this week. Fight for every point, get the win and boost our game points. We went into our match with Boland knowing that we needed the win and a decent win at that. Everyone in the team put up their hand today to make it happen.

“We have 30.5 game points, but that’s only 2 more than Free State and that’s why we won’t change our strategy in the final round. Mpumalanga will be playing for pride in front of their home crowd, so we will have to step it up and make sure we get the win.”

While North West take on the local favourites, Border will face neighbours Eastern Province, while Free State and Boland will go head-to-head in the final match.

“To win promotion, we must beat Mpumalanga decisively, because it Free State hammers Boland they could win on game points,” said Van Schalkwyk. “Boland is not out of it either; if they beat Free State and we draw or lose to Mpumalanga, they take the log. So it’s all to play for on Friday.”