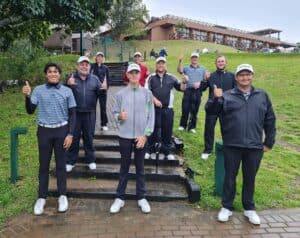 16 September 2021 – The battle for glory in the 60th South African Inter-Provincial Tournament is going down to the wire with several teams in the title fight and the battle for promotion after four days of action at San Lameer Country Club.

With severe weather was forecast for round four, the singles and foursomes sessions were switched around to give teams an opportunity to score the maximum points in case play had to be stopped.

With rain sweeping down on the course and the mercury dropping, North West came out hot in the singles, while unbeaten Province struggled to some momentum going.

Western Province picked up the pace in the afternoon session, with Le Roux and Jack Buchanan beating Wessels and Weber 3 & 2. North West won the next two games, but Sam Simpson and Ayden Senger claimed the last in a tightly-contested battle with Burke and Goldhill.

However, the 8.5 – 3.5 result helped North West to pull level with the Cape coastal side at the top of the log with 6 points.

North West will have to keep it in top gear for their final round clash with Central Gauteng after the Lions scored a decisive 9 – 3 victory against defending champions Ekurhuleni and moved to third in the standings, just 1 point adrift.

Western Province will face a feisty Gauteng North, who beat Southern Cape 8.5 – 3.5 to score their second win in a row.

In the final match on D-Day, Ekurhuleni and Southern Cape will have a showdown of their own to avoid the wooden spoon. Both teams have amassed 19 game points, but the 2019 champions have a slight advantage, with 2 points against the 1 of the Garden Route team.

Meanwhile the battle for promotion is also heading for a major showdown between Eastern Province and KwaZulu-Natal. 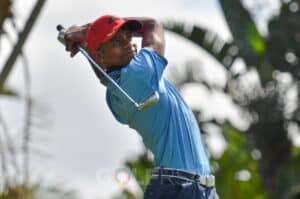 South African Golf Development Board member Devon Valentine (16) scored a crucial point in the singles that helped Eastern Province beat Boland 6.5 – 5.5 on day four and shot the side to the top of the B-Section log in the 2021 SA Inter-Provincial Tournament at San Lameer Country Club; credit GolfRSA.

Boland came out en force in the afternoon session to claw back 3 points, but De Beer and Van der Merwe secured the 6.5 – 5.5 win with a 4 & 3 result in the third game out.

Their fourth successive victory moved Eastern Province into pole position on 8 points, and they will start the final day against Mpumalanga with a 2-point edge on KwaZulu-Natal.

The host union was also in imperious form on day four.

Nathan Trodd, Thomas Lovett, Dan Bennett, Chris Erasmus and Jonathan Broomhead secured 5 points in the singles, and the side reeled in 3 more in the foursomes to hand Free State an 8 – 4 drubbing.

KwaZulu-Natal will be hunting more success in their final round match-up with Boland, but the side is currently sitting in second on 6 points in the standings. To have any chance to claim the title, the local heroes need Mpumalanga to beat the log leaders on Friday.

The final match will be between Free State and Border, who celebrated their first success on the wettest and windiest day of the week when they routed Mpumalanga 7 – 5.

SCORING LINKS
Click HERE for live scoring and results from the A-SECTION.

Click HERE for live scoring and results from the B-SECTION.