SA in 2nd place after 1st Round of Zone VI 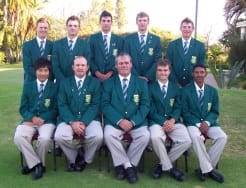 The South African Zone VI team won six of their singles matches, halved one and lost one to score 6½ points, out of a possible 8, after the first round in the international team competition being played at Chapman Golf Club, Harare.

Playing against nine other countries, and although a good days work was achieved, the South African team found themselves in the unfamiliar position of not being on top of the leaderboard at the end of the round. That honour went to the host nation, Zimbabwe, who scored 7 points.

In the singles format, one player from one country plays another from each country represented, each match counting for one point, if won.

Surprisingly Derik Ferreira, who was three up with three to play, bogeyed the long par 3 16th hole to go two up. His opponent then birdied the two remaining holes to finish all square, in so doing each player in the match recording a half point for his country.

Jake Redman will also be kicking himself, like Ferreira, although he went one worse, he lost his match against the talented 16 year old Zimbabwean Scott Vincent. The South African was two up with three to play. Things went pair shaped for Redman, from the 16th hole. His opponent played regulation golf over the last three holes to beat Redman one up. Redman played the last three holes four over par.

Tomorrow, the penultimate round of the competition, sees the teams play foursomes in the morning and betterball in the afternoon.