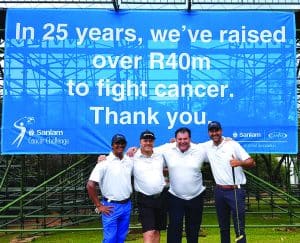 The finalists for the 2018 Sanlam Cancer Challenge National Final have been decided and players will tee it up at the Gary Player Country Club at Sun City on the weekend of 8-9 October to try and become the national divisional champions of South Africa’s greatest charity golf tournament.

The 2018 Sanlam Cancer Challenge drew around 40 000 golfers from roughly 800 golf clubs, with golfers between the ages of 11 and 82 competing nationwide for a place in the National Finals.

While golf may be the medium, it is the boosting of awareness of the disease and raising funds for CANSA that are the most important elements of the tournament series. Some clubs go out of their way to make the day as festive and successful as possible, such as Wolmaranstad Golf Club, in North West Province, which sold greens and raffle tickets before finishing off the day with an auction after prizegiving. The club raised an impressive R26 020, of which only R2 550 came from greenfees.

The ladies from Royal Oaks Country Club in East Rand went all out for their Sanlam Cancer Challenge day. All ladies played in bright pink, with additional pink merchandise such as belts, hats and shirts sold on the day as they raised R13 200 for charity.

Cathcart Golf Club in the Eastern Cape saw a field of 24 golfers turn out for the golf day, with Emmi Rossouw, a five-year-old cancer survivor, handing out the prizes. Emmi was diagnosed with cancer when she was nine months old, and has undergone chemotherapy ever since.

Meanwhile, at Prieska Golf Club in the Northern Cape, the new paediatric oncologist in Kimberley delivered a talk to the golfers participating on the day. She explained how the community had rallied behind a young child with cancer, ensuring an RDP house for the family, transport to school and food parcels, which are delivered by a CANSA volunteer.

Magersfontein Memorial Golf Estate, in the Free State, once again topped the charts in terms of money raised in the fight against cancer. For the fourth year in succession, the club raised an extraordinary amount of money for the cause. Astonishingly, they collected over R500 000 this year.

It was also an emotional golf day for the club members, who earlier this year lost one of their loyal members, Martin van Schalkwyk, to cancer.

Organisers opted use the Sanlam Cancer Challenge golf day as a platform for raising awareness around the symptoms and signs of cancer and reducing the risk of getting cancer.

CANSA made sunscreen available to the golfers and had their FotoFinder (mole-mapping machine) available throughout the day for golfers to have their moles examined. Protective clothing, hats and arm sleeves were on sale for golfers to protect themselves against the UV rays of the sun.

This popular golf tournament has once again showcased the tremendous generosity of South African golfers in their support of the fight against cancer.

“I would like to express our sincerest thanks for all these golfers being part of the Sanlam Cancer Challenge 2018,” said Gary van Loggerenberg, Sponsorship Manager Sanlam. “Your commitment and contribution will make a real difference to those affected by the disease, today and for generations to come.”

For more information go to www.sanlamcancerchallenge.co.za

About the Sanlam Cancer Challenge and CANSA

Sanlam and CANSA have partnered the Sanlam Cancer Challenge since 1993.

CANSA offers a unique integrated service to the public and all people affected by cancer. As a leading roleplayer in cancer research (more than R6 million spent annually), the scientific findings and knowledge gained from the research is used to realign CANSA’s health programmes as well as strengthen its watchdog role to the greater benefit of the public. CANSA’s wide-reaching health programmes include prevention and education campaigns, CANSA Care Centres that offer stoma and lymphoedema clinics, medical equipment hire, toll-free line and support to children and their families affected by cancer. There is also patient care and support in the form of 11 CANSA Care Homes for out-of-town cancer patients in the main metropolitan areas plus one hospitium (based in Polokwane) as well as two CANSA-TLC Lodges for paediatric oncology parents in Pretoria and Limpopo.

The purpose of the Sanlam Cancer Challenge is to raise funds and awareness annually for the fight against cancer. Visit www.sanlamcancerchallenge.co.za.