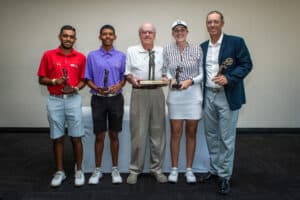 The annual Denis Hutchinson Challenge was hosted once again by Hutchie’s home club, Royal Johannesburg & Kensington Golf Club, and the team competition was contested on the West Course.

In addition to entertaining golf fans for years with his colourful commentary on the DP World Tour and Sunshine Tour, Hutchinson has been recognised with Lifetime Membership of the Sunshine Tour and as Honorary Life President of the PGA of South Africa – amongst his many accolades.

“Hutchy has been such a wonderful ambassador for South African golf for decades now, both as a player who competed with some of the greats of the game, and then as a commentator who became known as ‘The Voice of Golf’. It’s an honour for all of us in the family of South African golf to come together on a day such as this and take the time to recognise the immense contribution he has made to the game we all love,” said Thomas Abt, Commissioner of the Sunshine Tour and Sunshine Ladies Tour.

GolfRSA CEO and SAGDB Managing Director Grant Hepburn added: “We are honoured to have our young rising stars partake in this celebration of one of our golfing greats. Not only could they learn from the professionals, but Hutchie has a world of experience which he is eager to impart, and this opportunity for our youngsters to spend time with him was priceless.”