South African amateur golf team finished 11th, along with two other teams, on conclusion of the Eisenhower Trophy, this being the country’s best performance since 1998.

The team competition, which forms part of the World Amateur Team Championship, held biannually, was played in Adelaide, Australia.

Dylan Frittelli and Cameron Johnston, playing the Royal Adelaide Golf Club layout, recorded the best two rounds of the South Africans, 76, three over par, and 74, one over par, respectively, for a team score of 150, four over par. The team finished with a 72 hole aggregate of 581, one over par, tied with Wales and New Zealand. 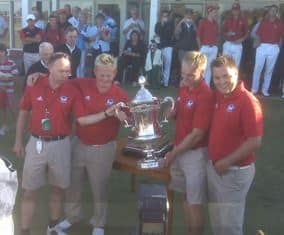 Scotland proved themselves as the stand out team this week, stretching their lead today to 9 strokes, their final 18 hole team score being 147, one over par. The leaders finished with a 72 hole aggregate of 560, twenty under par.

The United States finished on 569, eleven under par, and Sweden a further five strokes back.

“It was very tough today,” said Enver Hassen, team captain and president of the South African Golf Association (SAGA). “Our objective was a top ten finish, we ended up very close to that. If you look at today’s scores, no team went under par. We therefore had respectable round but not enough to move up the leader board.”

“Cameron had two birdie opportunities on this final two holes, unfortunately lipping out on both occasions,” said Hassen.

Johnston, 37 year old Milnerton Golf Club member, played the best of the South Africans in the windy conditions today; “when the wind blows I always seem to play better,” quipped the Cape Town based player. Starting on the 10th tee, Johnston bogeyed the first, birdied the second, got his only double bogey of the round at the 16th hole and again birdied the very next hole, to turn one over par. “The bunkers killed me this week,” said Johnston, after his round today. “I hit my tee shot left into a greenside bunker on 16, leaving myself with a tricky shot onto a long narrow green.” His frustration was in reference to that fact that in each round he played, during this event, he recorded a double bogey, each entailed a trip into a bunker. The current SA Mid Amateur Stroke Play champion played his back nine in level par recording a birdie on the 3rd hole and a bogey on the 4th.

“The wind really got up, must have been a three or four club wind,” is how Frittelli described the conditions after his round. The 18 year old Irene Country Club player, who is currently on a golf scholarship at the University of Texas, again produced a steady round. “I am satisfied with my 76 today. I had my opportunities too. Two down wind holes, 1 and 8, I should have birdie, failed to up and down,” pointed out the current SA Boys Champion. Frittelli turned two over par, having had bogeys at hole 14 and 18, and came back one over par, made up of two bogeys and a birdie.

Jacques Blaauw, the third member of the team, struggled again today. He recorded a 78, five over par. The 22 year old Paarl based player started well with a birdie on the 10th only to follow this up with four consecutive bogeys. From here it was a struggle in the difficult conditions that prevailed. A birdie at the 18th hole (his ninth) ensured he turned at two over par. The current Glacier SA Amateur and SA Amateur Stroke Play champion played his back nine in three over par which included two birdies, three bogeys and a double bogey. “It was tough but I couldn’t make a putt and again I just had some bad luck,” said Blaauw after his round. “Things just did not go my way this week,” he concluded.

Rickie Fowler (US) was the best performing player this week. He carded a 75, two over par, today giving him a 72 hole total of 280, ten under par. Callum Macaulay (72), a member of the victorious Scottish team, finished two shots adrift along with Nick Taylor (70) of Canada.

The best performing South African, and has been since the conclusion of the second round, was the youngest member of the South African team, Dylan Frittelli. He finished with a 72 hole aggregate of 290, even par, in 10th place along with three other players.