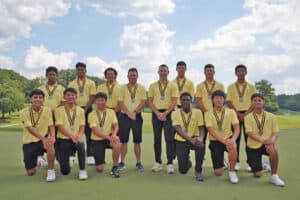 The International Team at the 2022 Junior Presidents Cup at Myers Park Country Club in Charlotte, USA

20 September 2022 – South Africa’s star players Yurav Premlall and Aldrich Potgieter performed admirably in the 3rd Junior Presidents Cup, accounting for an impressive four and a half points for the International Team, but it was not enough to stem the charge of the United States, who roared to victory on the back of a stunning final day of singles action.

The Junior Presidents Cup was developed to give the world’s best non-European juniors a unique playing opportunity to compete in an international team match-play competition against a team from the United States and showcase the global reach of junior golf. 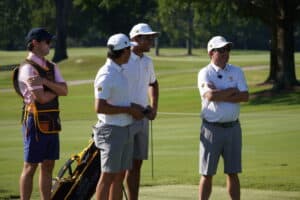 It looked so promising for the International Team, captained by South African Tim Clark, as they led by 7.5 – 4.5 after the opening day, with a first ever victory in sight.

Premlall and Potgieter starred for the away team, each winning both of their foursomes and fourball matches.

In the afternoon fourball matches, Potgieter and Trinidad and Tobago’s Chris Richards narrowly beat Matt Moloney & Bryan Kim 1-up, before Premall and Guan combined again for a 3&2 victory over Johnnie Clark & PJ Maybank.

Unfortunately for Premlall, a pinched lower back caused an early end to his tournament, and his singles match with Matt Moloney was declared a tie after physios were unable to get the South African fit in time.

Once the Singles matches got underway, it was the US Team that went on a tear to ensure a third straight Junior Presidents Cup victory.

They took home a winning point in four of the first six matches, including Jackson Koivun’s 3&2 victory over Potgieter and split another to ensure a remarkable comeback. It was much of the same in the bottom half of the draw, with the US players simply dominating in the one-on-one format.

RESULTS (International Team vs US Team)