Canadians Joey Savoie and Josh Walen produced the lowest combined total of the tournament in the final round, an eight-under-par 134 that sealed Canada’s third victory in the International Team Competition on 12-under 556. 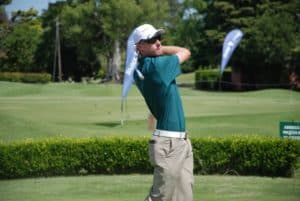 Brazil was second, Argentina third and Saulez and Mitchell carded 146 in the final round to seal fourth for South Africa on 581.

Saulez offset a trio of bogeys with three birdies for an even-par 71 to finish the championship in a tie for 10th on three-over 287 while Mitchell’s day started with a double bogey and he battled to get anything going. Despite a solid showing, he closed with a 75 to finish joint 19th on 10-over 294.

“I had a pretty solid final day, didn’t make too many mistakes,” said Saulez.

“Unfortunately I didn’t take advantage of any of the par fives, which was disappointing, because that prevented me from posting a decent sub-par score. It was a pretty solid event for both of us finishing in the top 20. It’s been a fantastic experience and learning curve and we enjoyed every moment.”

Mitchell agreed and added: “Matt and I are really looking forward to the Argentine Amateur after adjusting nicely to the course here at Los Lagartos. We’ll have a day off on Monday and then move across to the Jockey Club for our first practice round on Tuesday.”

The 122nd Argentine Amateur Championship will be played from 16-19 November. This event is the sixth oldest amateur championships in the world and the most highly rated in Latin America.

Meanwhile Savoie gave the Canadians cause for double celebrations when he lifted the Individual Competition title. The 23-year-old Middle Tennessee State University final year student fired a five-under-par 66 in the final round to win by two shots from Brazilian Herik Machado.