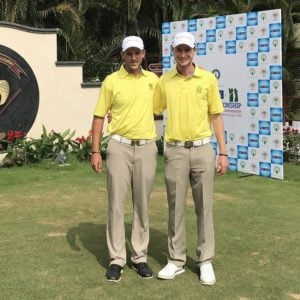 5 December 2017 – Malcolm Mitchell and Clayton Mansfield made a fabulous start in the IGU Yes Bank 117th Amateur Golf Championship of India on Tuesday.

The KwaZulu-Natal pair both carded rounds of even-par 72 in the first round of the 36-hole stroke play qualifier at the Karnataka Golf Association course Bangalore. Mitchell and Mansfield will start the final round tied for seventh and four off the pace from Indian duo Yuvraj Chandigarh and Jay Gujarat.

Hoping to emulate Richard Sterne and Charl Schwartzel, who won back-to-back in 2000 and 2001, the pair jumped at the chance to represent South Africa in India.

“South Africa has a long association with the Indian Golf Union and in view of our strengthening relationship through the Fellowship Cup, we decided to send two players to compete in this year’s championship,” said GolfRSA CEO Grant Hepburn.

“Both players have represented South Africa with immense pride this season and we were delighted to offer them this unique opportunity to gain more international experience.”

Mitchell celebrated his international debut for South Africa with an unbeaten performance during the Fellowship Cup Test against India at Leopard Creek in August.

Mansfield helped the South African Universities Team seal a top 10 finish in the 29th Summer Universiade in Taiwan and he combined with Mitchell, Garrick Higgo and Matt Saulez to claim an eighth consecutive victory for South Africa in the All Africa Golf Team Championship at Elephant Hills Golf Club in Zimbabwe.

In November, Mitchell travelled to Argentina with Saulez where the pair tied for fourth in the 46th Copa Juan Carlos Tailhade at Los Lagartos Country Club. A week later, Mitchell claimed a top five finish in the Argentine Amateur Championship.

The South African duo arrived in India on the weekend.

“The weather is perfect,” said Malcolm. “Since it is winter in India, it’s hot and humid, just like Durban. The course is challenging. It’s a tight Bermuda layout and it features the two longest par fives that either of us have ever played. The ninth is 622 yards, around 568 metres. The 14th is nearly 600 yards; about 540 metres. Your second shots are playing over 300 yards.”

Mitchell turned four-over after a triple bogey at the second hole and further drops at four and eight, but he rallied with birdies at 10, 12, 15 and 17 to get back to level par.

Mansfield mixed two bogeys with a pair of birdies.

“It was an interesting day,” said Mansfield. “We played off the tops and the wind blew around five to 10 km per hour. It was overcast to start, but we had nice, sunny weather down the finishing stretch.

“I birdied the first and made seven straight pars, but I bogeyed nine to turn level. I dropped another shot at 14, but I made a nice birdie at 16 and parred the last two holes for 72.”

Team Thailand took the lead in the Team Competition, scoring two rounds of 69 to lead at six-under-par 138. The South African pair finished six shots back in second, while India’s B-team – Kartik Sharma and Dhruv Sheoran – moved into third on 147.

“We are in a good position, but we both felt that it could have been better,” Mitchell said. “We would both love to go low in the final round. Who knows, perhaps one of us can even win the qualifier.”

The top 32 golfers will advance to the match play stage.