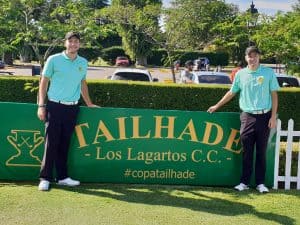 Both GolfRSA National Squad players opened with rounds of five-over-par 75 that left them around the midway mark on the first round leaderboard at Los Lagartos Country Club near Pilar.

Filippi and Nel finished eight shots off the pace from Horacio Carbonetti.

The local teenager fired a three-under 67 to open up one shot lead over Manuel Torres from Venezuela. Rafael Miranda from Ecuador, Argentina’s Abel Gallegos Caputo and Brazilian golfer Matheus Park share third on 69

The Ernie Els and Fancourt Foundation duo arrived in Argentina on Tuesday and went straight to the course, but the first practice round got rained out.

“We had a look at the course on Wednesday and truth be told, we thought we would start a lot better,” said Nel from Bloemfontein.

“The course is green and lush and the greens are running pretty fast. Accuracy is at a premium at this course. You have to place yourself well off the tee box and there are a few really tricky holes, but it’s definitely a score-able track.”

Filippi from Milnerton felt they should have been much nearer the 70 mark on day one.

“We both played really well, but both had a few bad holes that cost us,” said the Western Province player. “Thankfully the weather has been tolerable; much better than we expected. It was quite hot on Thursday, but we had some cloud cover that cooled things down considerably.

“We’re both feeling patient and not over-anxious after the disappointment of the first round. We still have three rounds to go, so we’re both going out there today hoping to get back a few shots.”

The 47th edition of the Tailhade Cup is held concurrently with the 23rd International Team Tournament, which was won by Trevor Immelman and Ulrich van den Berg in 1999, and again in 2009 by Ryan Dreyer and JG Claassen for South Africa.

Ecuador’s Miranda and his partner Juan Moncayo, who carded 71, lead the team competition on two-under.

Ireland’s Tiarnan Maclarnon and James Sugrue are three shots back in second, while Brazil, Germany, Spain and Mexico share third on level par 144. South Africa is 10 shots off the pace.