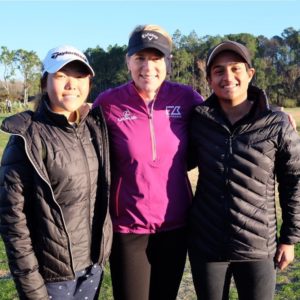 12 January 2018 – South Africa’s top female amateur talents – Kajal Mistry and Woo-Ju Son – gave a superb account of themselves in a top field at the prestigious Annika Invitational USA, presented by Rolex, in the United States.

Mistry, the country’s top ranked senior, weathered freezing conditions to close out a top six finish at the World Golf Village in St Augustine on Monday, while South Africa’s number one ranked junior Son tied for 29th on 12-over 228.

Mistry and Son were drawn together for the opening round at the Slammer & Squire Course.

Pars were rare in the cold and windy conditions and only two players managed to finish in red figures. Mistry opened with a 73 to start the second round six shots of the pace. The reigning Sanlam South African Women’s Amateur champion produced a 75 to move into joint eighth.

In Monday’s final round, the South African junior offset a trio of bogeys round with four birdies for a final round 71 to tie for sixth alongside American Yealimi Noh ad Ching-Tzu Chen from Taiwan on three-over 219.

“I loved every minute of it and this tournament rates right up there with the highlights of my career, but it was also a huge test of patience and perseverance,” said the 17-year-old Randpark golfer.

“The first thing that struck us was the weather. We left South Africa in high summer and landed in freezing cold weather, with the temperature between eight to 12 degrees Celsius. It was like playing in the middle of winter in Joburg and really tough to keep your hands warm.

“The altitude was another big surprise. We had to take at least two and half clubs more than we would need in Joburg to hit it the same distance. The course played really long due to the strong wind and the wet fairways. I had to use hybrid, 3-wood, 4-iron and 5-iron to hit my approaches on all the par fours and par fives.

“I had a few highlights, but my best shot of the tournament was at the very tough par-three 13th hole in the final round. It played 122 metres, but the wind straight into us. I had to take a 7-iron and I hit it to give. I literally tapped in for birdie.”
Meeting World Golf Hall of Famer Annika Sorenstam was the ultimate highlight.

“Annika participated in everything,” said Mistry. “The tournament is incredibly well organised and really well supported by the American Junior Golf Association. Annika made a point of meeting every player. She hosted a clinic, a seminar and all the dinners. She drove around the course and watched the action and she was just everywhere. I was very young when she competed, but Annika is an idol to every female golfer who is serious about golf as a career.

“To finish on the final hole with the World Golf Hall of Fame as the backdrop was really inspirational, but seeing Annika waiting for behind the 18th green in the final round was the cherry on the cake for me. My heart was literally racing like a Formula 1 car.

Pint-sized Son had an especially tough time with the altitude and the strong wind. The Country Club Johannesburg golfer opened with a 77, shot 76 in the second round and closed with a 76.

“It was a fantastic experience,” said Son. “I need to work on gaining more distance, because it was a real struggle in the altitude. Still, I’d do it all over again, given the chance. Kajal and I can’t thank GolfRSA and Womens Golf South Africa enough for giving us the opportunity to compete against these top golfers and to meet Annika.”

Lei Ye from China birdied 12, 15 and 16 to win the 10th annual edition on two-under 214. She defeated American Lucy Li by two shots and finished three shots ahead of the 36-hole leader, Mathilde Claisse from France.