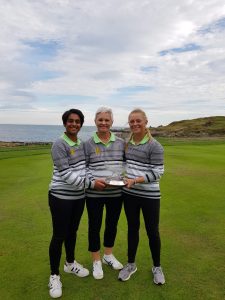 17 August 2018 – Caitlyn Macnab and Kajal Mistry took away a lot of positives after exiting the Girls British Open Amateur Championship at Ardglass Golf Club in Ireland.

The GolfRSA National Squad duo ticked their first box when both finished in the top 64 to progress to the match play stage in the 90th edition of the prestigious junior event at the famous Country Down links.

Mistry carded rounds of 73 and 77 to tie for 31st, while Macnab shot 74 in the first round and rocketed to tie for third on one-over 141 with the low round of the tournament, a three-under 67.

While Randpark’s Mistry was knocked out in the first round, Macnab from Serengeti advanced to the third round where she was eliminated by Sophie Johnson from Englang.

“We were all disappointed when Caitlyn lost in round three, but we did not leave empty-handed,” said Womens Golf South Africa President Sally Greasley.

“Cat and Kajal both finished in the prizes. As a team, they took third place in the Team Competition behind winners France and Ireland in second. Cat’s third place finish in the Stroke Play Qualifier also earned her the winner’s trophy in the Under-16 Competition. 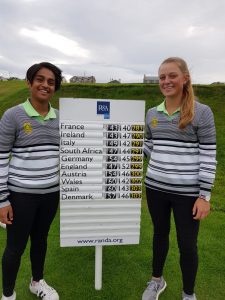 “I think South Africa can be truly proud of the way both girls came through this baptism of fire. They represented South Africa and GolfRSA with honour and were wonderful ambassadors, especially given the extraordinary tough conditions they had to brave during the championship.

“Looking at them battling in gale force winds for four days, you could never tell what was going on with their rounds if you looked at them. They showed incredible fighting spirit and humility in victory and defeat.

“I believe staying on in Ireland until we travel to Carton House and giving them the chance to play more links courses to build more experience is going to serve them really well in preparing them for the Espirito Santo Trophy at the end of August.”

Mistry lost 2 & 1 to Martha Lewis from England as Macnab scored two decisive victories to reach the final 16. She beat Leah Temple-Lang from Ireland 3 & 1 in the round one and defeated Celeste Dao from Canada 4 & 2 in round two.

The Serengeti golfer faced Johnson on the first tee just after Storm Debbie hit the east coast of Ireland early on Friday morning.

“It was the worst weather we experienced since arriving in Ireland,” said Greasley.

“Kajal and I could barely walk on some holes and we even had to get Cat an electric cart, because she just couldn’t pull her cart in the wind.

“It was heart-breaking to watch the girls battle the driving rain and the wind gusting up to 80 km per hour. We gave up on our umbrellas, because the struts were bent in minutes. Cat made a birdie start with a great drive straight into the wind up the hill, but was forced to concede the third after her approach shot landed right next to a bush.

“Both players had lost balls at the fourth, but Sophie won the hole with a triple bogey to go 1-up. She also won five and six and led 3-up after the pair halved seven in bogeys, eight in birdies and the ninth in pars.

“They halved 10, but Cat had to 11 after she hit her first drive out of bounds on the beach and her second drive found the bush. She lost 12 with a bogey and they halved 13 with a birdie. The match was over after they both made par at 13. 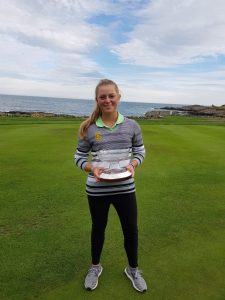 Macnab was disappointed but recognised the value of experience.

“The first thing we realised when we arrived at Ardglass was that we would have to dig really deep and get very creative,” said Macnab.

“There isn’t a course in South Africa that can prepare you for true links course like we’ve experienced. The greens and fairways are rock hard and the wind was a serious factor all week. Kajal and I were over the moon to make the top 64 in an international championship of this stature and at a course as challenging as this.

“I managed to get around okay in the wind during the first two rounds of the match play, but the third round was an ordeal. It was incredibly tough to control the ball in the howling wind and rain. I am very proud of the fact that I never stopped fighting.

“This week has been an eye-opener for both of us and every shot we played in this championship was an experience that will help us in the future.”

Macnab and Mistry will debut in the Espirito Santo Trophy at the World Amateur Team Championship at the end of August alongside former South African number one Kaleigh Telfer, who represented South Africa in the 2016 event in Mexico. The Ernie Els and Fancourt Foundation player will be flying in from the United States later this month, having just started her second season at Auburn University.