Sean Baker halved against Jacques Schutte to help KwaZulu-Natal to an 8 – 4 victory against Free State on day four of the SA Country Districts at Potchefstroom Country Club; credit Pieter Els.

17 May 2018 – The fight for glory in the 2018 SA Country Districts Inter-Provincial is perched on a knife’s edge. KwaZulu-Natal pulled within striking distance of log leaders North West in Thursday’s fourth round, while Boland and Northern Cape will fight it out in the battle for promotion at Potchefstroom on Friday.

North West enjoyed a well-deserved bye, having amassed six points, but they will have to come out guns blazing with KwaZulu-Natal finished just one point adrift.

Mpumalanga had one final match to avoid relegation, but Limpopo also enjoyed a prosperous day and won their bout 7.5 – 4.5.

Limpopo, third in the standings with three points, will face Free State in the final showdown. 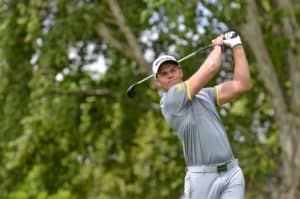 LB Boshoff helped Boland back to the top of the A-Section log with a 6 & 4 Singles win on day four of the SA Country Districts at Potchefstroom Country Club; credit Ernest BlignaultBoland mowed down Eastern Province 10 – 2 and the extra game points helped the side to edge out Northern Cape for the top spot in the log.

Both teams have six points, but Boland will take 2 precious extra game points when the two teams go into the final battle for the coveted promotion.

Boland, who were the wooden spoon 12 months ago at San Lameer Country Club, took a 3.5 lead in the Foursomes and never took their foot off the gas. WP Botha banked their first point in the Singles when he whipped Tiaan van der Bank 6 & 4 and LB Boshoff added another when he knocked out Rhalf Manuel 6 & 4.

Daniel Cronje closed out the decisive win when he halved with Ivan Daniels.

Southern Cape were in blistering form and took a clean sweep in the Foursomes, but the experienced Border veteran Ben Jonas denied the Garden Route team a whitewash when he eliminated Alex van Wyk 4 & 2.

View the results and logs under LIVE SCORING at www.golfrsa.com