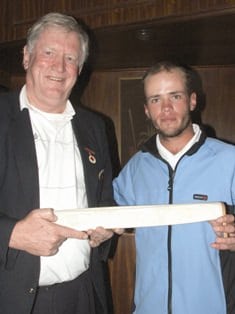 Elrick van Eck, one of many amateurs from South Africa who attends college in the America, won the Limpopo Amateur at Polokwane Golf Club on a credible score of 280 (2 under par) over the weekend.

Scoring was extremely tough on a course that traditionally yields low scoring but this year, due to the unfortunate circumstances revolving around the Polokwane’s greens dieing after being sprayed with a pesticide just 4 weeks prior to the tournament, putting made low scoring extremely difficult.

Van Eck held his nerves on the greens throughout the tournament and with limited mistakes kept himself on top of the leaderboard and led to a 3 shot victory over Steve Williams and Riaan de Bruyn, two of Central Gauteng’s 2008 Interprovincial Players.

Southern Cape’s Jake Redman performed admirably to finish in a tie for 4th on a score of 290 (2 over par) with Mpumalanga’s PG van Zyl, Anthony Michael and Michael van de Venter, who coincidentally also attend college in America.