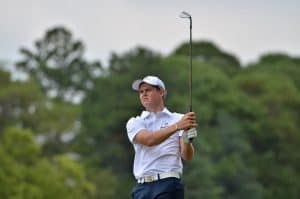 25 February 2019 – It has only happened half a dozen times since Dale Hayes won the first South African Stroke Play Championship in 1969, but Wilco Nienaber is determined to land the coveted double after his South African Amateur victory last Friday.

The country’s leading amateur, who claimed the flagship event on the 36th hole at King David Mowbray Golf Club, will spearhead the local challenge against a 40-strong international line-up when the 72-hole tournament gets underway at De Zalze Golf Club on Tuesday.

Etienne Groenewald became the first golfer in 1980 to win the SA Amateur and SA Stroke Play in the same calendar year.

With only six ‘double winners’ in 50 years, Nienaber knows the odds are stacked against him, but the Bloemfontein golfer backs himself to go the distance,

“I’m going all out and it I can make a decent start, I will be among the frontrunners on Friday,” said GolfRSA National Squad member, who last year became the first South African winner of the 36-hole Qualifier for the Amateur Championship since qualifying was introduced in 1983.

“Winning the South African Amateur is the highest achievement for any South African amateur and winning the SA Stroke Play is a close second. The formats of the two tournaments are vastly different, so you have to wipe the slate clean.

“After Friday’s celebrations, I didn’t go near a club all weekend. I pushed reset this morning when I arrived at De Zalze for my practice round. It’s a great layout. There are some risk and reward holes and drivable par fours, so I think it’s going to be a week of low scoring. If you can keep it in play this week and you bring a hot putter, you’ve got a chance.”

The local challenge is further strengthened by the six seven players in the rankings, including number one ranked junior Jayden Schaper, Deon Germishuys, Matt Saulez, Malcolm Mitchell, Casey Jarvis, as well as 15-year-old GolfRSA National Squad player Yurav Premlall, who moved to 10th spot after a top 20 finish in the SA Amateur qualifying.

Recent history, however, favours the foreigners.

Jason Smith was the last South African to lift the SA Stroke Play trophy when he edged out Scot Bradley Neil, Irishman Dermot Mcelroy and countryman Stefan Cronje at Benoni Country Club in 2014.

Jack Hume from Ireland won at Blue Valley in 2017 and a year later, Edgar Catherine made it another French victory on South African soil with his triumph at Kingswood.

Last year Nienaber fired a final round six-under 66 and Saulez carded 67, but the South African pair could not derail Sweden’s Oliver Gillberg from marching to a 27 under par victory at Pecanwood.

This year’s foreign entries feature national squads from Scotland, England, Ireland, Germany and India, as well as individuals from Great Britain, the Netherlands and Switzerland.

Scotsman Euan Walker has already proven the international campaigners are ready to take the fight to the hosts with his victory in the African Amateur Stroke Play Championship a fortnight ago and last week, the Irish had two contenders in the quarter-finals and semi-finals at the SA Amateur.

“I believe we will stop the run of foreign champions,” said local favourite and former South African number one Garrick Higgo. “There is a lot of depth in South African golf and we showed that we have the talent and determination to beat the international players at King David Mowbray last week.

“This course requires accuracy, patients and a bit of aggression to score well and I believe we have enough talent in the ranks to produce low scores to give the foreigners a run for their money.”

The 72-hole SA Amateur Stroke Play Championship tees off on Tuesday and the 150-player field will be cut to 65 and ties after 36 holes for the final two rounds.