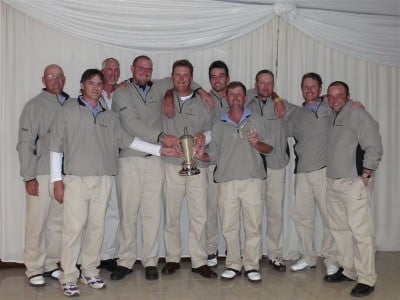 The confident but admitted under dogs, Rustenburg won the Northern Province League Finals at the Randpark Club on Sunday when they managed to scrape a half out of their match against the side from Witbank.

Despite being dominant for the fist 3 rounds, Rustenburg were made to sweat by the little fancied side from Witbank. Pieter Cooper from Rustenburg needed to get up and down on the last hole from a greenside bunker to beat Eric dui Toit 1 up on the final afternoon for Rustenburg to scrape through after Randpark did all they could in beating challengers for the title, Benoni Country club 8 – 0 in their match.

Despite home ground advantage the League side from the Randpark club stumbled on the Saturday afternoon when they played against the eventual winners Rustenburg on the shorter and tighter Windsor Park layout.

With a far superior games count, that slip cost the home side dearly.

Fancied to beat their Western neighbours, the Randpark side got off to a slow start and things did not improve as they lost the first 5 games out on the course before team Captain, Erwee Botha saved the score card by posting a 7/6 win over his opponent at number 3, Anthony Michael winning at two, and Ruan Botha who was undefeated during the CGGU league season scoring a half.

Rustenburg were deserving winners as they had 4 wins and a half out of their 5 matches.

PG van Zyl, playing at number one for Witbank proved his status as one of the countries top players when he remained unbeaten at the number one position.

Next years Tournament will be held in the North West Province.