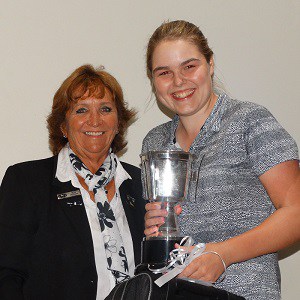 15 March 2018 – Harvard-bound Chloë Royston from Newcastle staved off a spirited challenge from South Africa’s number three ranked Zethu Myeki when she won the Stroke Play Division in the KwaZulu-Natal Championship on March 12.

Making the most of sunny and wind-still conditions Mount Edgecombe Country Club, Royston reeled in a hat-trick of birdies from the seventh to turn three-under. With Myeki on the rampage over the back nine, Royston added three more gains to set the first round target with a flawless six-under-par 64.

“I kept the momentum going with a birdie at 14 and made birdies at 16 and 17 to stay in front,” said Royston. “I hit the ball really well and I managed to avoid trouble. I hit a good drive down the 16th fairway and hit my approach to about four feet and made the putt. At 17, I hit another good drive and had about 80 metres in. I hit it to six feet and holed the birdie putt.”

Myeki, meanwhile, erased a pair of bogeys on the front nine to turn one-under and racked up four birdies, including one at the par-four closing hole, to close the gap to just one shot.

Royston came into the event with some good form. The 19-year-old Cotwold Downs golfer followed top fives in the Eastern Province and Border Championships with a runner-up finish in the North West Women’s Open, while gaining experience in her debut season on the Sunshine Ladies Tour and she felt confident heading into the final round with such a slender lead.

“I knew Zethu would be hard to beat, but I gained a lot of confidence and experience since the start of the season,” said Royston. “It was important to stay in the moment and to play shot-for-shot in the final round and not get swept up in what was going on around me.”

Myeki drew level with birdies at three and nine, but the Gauteng golfer gave Royston some breathing space when she bogeyed 10 and 11. She pulled three shots clear with her second birdie at 12, but let Myeki back into the challenge with a bogey at the par five 14th.

“I hit a really good drive, but my approach finished short in the water,” Royston explained. “I had to drop and hit my fourth to 12 foot, but I missed the par putt.”

“Over the last four holes, I just tried to keep my card clean,” Royston said. “It was quite an amazing feeling to beat Zethu. She is one of the best amateurs in South Africa and someone I admire a lot.

“I would have loved to have won the double, but Larissa (Du Preez) played exceptional golf to beat me in the second round. At least I had an extra day to prepare for my trip to Harvard.”

Royston achieved eight distinctions and was one of 11 pupils who made the Independent Examination Board’s List of Outstanding Achievers, which earned her early acceptance into the Harvard University’s undergraduate programme in December.

“At this stage I’m not certain yet if I will study medicine or maths, but luckily I don’t have to declare a major until much later,” said Royston, who was diagnosed with Type 1 Diabetes at the age of seven. She also recently developed an App, which synchronises a phone with the insulin testing device, which means that children can have uninterrupted sleep.

“I’m really looking forward to meeting the other players on the team. I’ll have a chance to see all the facilities, hang out with the team, look around the campus and catch up with my brother Greg, who is also at Harvard.

“I’ll plan to play more amateur events until May, when we travel back to the USA for my brother’s graduation. I’m also looking forward to playing the Sanlam SA Women’s Amateur Championship before I leave for school in August.” 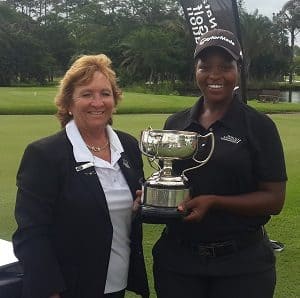 The Randpark golfer made quick work of her first round opponent Robin Eksteen and downed Bronwyn Rae 2 up to reach the semi-final, but she needed 21 holes to eliminate Casandra Hall from Ekurhuleni.

Son knocked out Kim Strauss, Brittney Fay-Berger and Du Preez on her way to the top two and this match also went to extra holes, with Myeki clinching victory at the 20th hole.

The Kroonstad golfer beat Isabel Verwey 7&6 in round one and downed Cameron Seboa 2&1 in round two to reach the semi-final. After eliminating Sabiha Bacaus 1-up, she defeated Fradl 5 & 4 in the final.