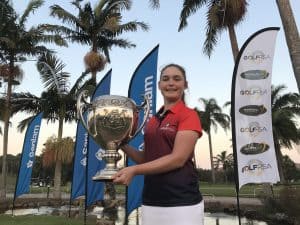 11 July 2018 – Western Province junior Jordan Rothman confirmed her status as one of South Africa’s future golfing stars when she knocked out two of the country’s top amateurs for the Sanlam South African Amateur Championship title at Umhlali Country Club.

The 15-year-old Durbanville golfer made it to the final on Wednesday afternoon with a 2 & 1 victory over Michaela Fletcher in the semi-finals and faced former number one Kaleigh Telfer, who edged out reigning Sanlam SA Women’s Stroke Play champion Casandra Hall.

Rothman sealed victory with a birdie putt at 18 to beat Telfer 2-up.

“I’m over the moon. It hasn’t sunk in yet,” said Rothman, the youngest winner of women’s amateur golf’s flagship event since Ashleigh Simon, who was two months shy of 15 when she won her first title at Strand Golf Club in 2004.

“Kaleigh and Michaela were definitely the favourites, and I was quite happy to come into the last day as the underdog. It took all the pressure off me. Even my dad told me after the quarter-finals to just go out there and enjoy myself. My dad said I’d already done enough to make him burst with pride and that helped, plus I had the best caddie in world to keep my head in the game.”

Rothman had Talent Development Squad player Kim Turgutt from Randpark on the bag for the two biggest matches of her short career.

“I only had enough money to pay for a caddie for the qualifying round,” she explained. “When Kim got knocked out by Michaela in the second round, she volunteered to take my bag because she had to stay for the duration of the championship. She really helped me to stay focussed and it’s was great to share this experience with her.”
Rothman started strong against Fletcher and was 3-up after four holes.

Fletcher started to find her stroke on the greens. The Maritzburg golfer won the next two holes to close the gap to 1-down and squared the match with a birdie at 10.

“I really had to work hard to win,” said Rothman, who edged ahead with a birdie at 12 and closed out the victory with another gain at the par five 17th.

“My heart was all over the place on the back nine, but she stayed very calm and she didn’t show any emotion. That was definitely the toughest match of my life, but it prepared me well mentally to face Kaleigh in the final.”

“I bogeyed six and seven, but I won the ninth with a par to level the match again,” said Rothman. “I have to applaud Kaleigh for her sportsmanship at the 13th hole.

“Her ball moved when she tried to remove a twig and she came up to me on the green and told me about the penalty. She could have waited until after I had putted, but I think it says a lot about her character that she told me straight away. That left me with two putts for par to win the hole.

“Kaleigh won the next hole, but I went 1-up again at 15. Kaleigh had hit her drive behind this silly tree and all she could do was punch out. I knew I could win the hole with par, so I lagged my first putt close and tapped in for the win.”

The pair halved 16 in pars and 17 in bogeys, but the closing hole belonged to Rothman.

“I wasn’t thinking too much about leading because I just wanted to keep playing my own game, but when I stood with the 6-iron in my hand on the 18th tee, my heart was hammering in my chest,” she said. “I could feel myself trembling and I told myself to just get it on the green.” 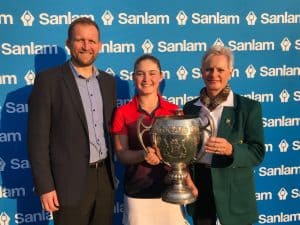 Rothman’s tee shot pitched a foot from the pin, leaving her an easy birdie putt for the win.

“I can’t describe what this means,” said Rothman, a member of the GolfRSA B Squad and the Womens Golf Western Province High Performance Squad.

“I’m incredibly grateful to GolfRSA and Womens Golf South Africa and to Womens Golf Western Province for the all opportunities they have given me. Playing for Western Province in the IPT and 72-Hole Teams Championship and competing in the Himbara World Junior Golf Championships in Indonesia last month definitely built my experience and my self-assurance.

“That’s what gave me the confidence to face two really tough opponents and wear them down. I still can’t believe that I’ve done it; this is a dream come true.” 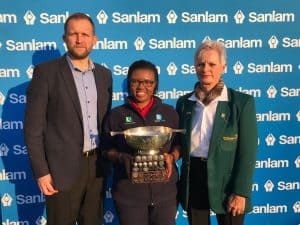 Currie from Port Shepstone beat Elsune Roode 4 & 3 to reach the final two, while Moodliar gave the home crowd plenty to cheer about when she beat Kim Strauss 1-up in her semi-final. Over 17 holes, both players won five holes, but Currie broke the stalemate when she defeated the local favourite 1-up at the final hole.