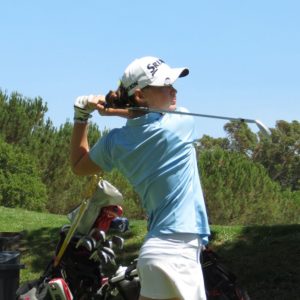 Jordan Rothman, a 15-year-old pupil at Curro Durbanville, has become the first girl to qualify for the finals of the Bridge Fund Managers Junior Series, a national series of 18 events sanctioned by GolfRSA.

In the finals in April 2018, Jordan will compete against some of the country’s best U-19 boys for the grand prize of an all-expenses paid trip to the USA to play in the prestigious Junior North and South Championship at Pinehurst.

Jordan, who only took up the game just over three years ago and already plays off a scratch handicap, qualified for the finals after finishing third in the juniorseries.bridgefm.co.za event at Durbanville golf club on 5 January 2018.

She was in sizzling form, making birdies on the first two holes and grabbed the tournament lead when she birdied the sixth hole to go 4-under par. A gale force South Easter put paid to a record-breaking round, but Jordan bravely battled the conditions and had a putt for birdie on 18 to take the tournament lead at 3 under.

A disastrous four putts later she had to settle for an even par round, that momentary lapse costing her the tournament win. The good news was she still qualified for the finals because the first and second place finishers, Tyran Snyders and Sam Simpson, had already won events in this year’s Bridge Junior Series.

Jordan, who starts Grade 10 in 2018, is a sporty girl who loved playing netball: “But I kept breaking my fingers and twisting my ankles.”

Her sporting life was transformed when she discovered golf.

“My dad plays and I thought if I started playing I’d get to spend more time with him,” says Jordan. “So, I went to the driving range with him and when we got home he said to my mom ‘this girl can really hit a ball’. He told me if I’d prove my commitment to the game by hitting 1000 balls at the practice range, he would sign me up for lessons.”

Just two months later she eagerly reported to her dad Ian Rothman that she had hit 1400! The lessons began and so did her speedy rise up the national rankings.

Jordan’s career highlights so far include beating WGSA senior number 1 Kajaj Mistry in the second round of the Sanlam SA Women’s Amateur last year and being part of the title winning Western Province team at the SA Women’s Interprovincial Championship in 2017.

Four putting the 18th at Durbanville was a painful reminder of the cruelty of the golfing gods, but Jordan has an unusual way of coping with inevitable miss-hits: “I am a big daydreamer on the course, which keeps my mind off the bad shots.”

Speaking of dreams, Jordan’s goal is to hone her craft on the challenging college circuit in the USA, before turning professional. She got invaluable career advice from South Africa’s greatest woman golfer and Major champion Sally Little.

“I met Sally Little at Kuils River Golf Club last year. She congratulated me on my play and invited me join her for two rounds at Metropolitan Golf Club, which was a privilege,” says Jordan.

Her goal of competing in the USA could come sooner than planned if Jordan brings her A-game to the Bridge Junior Series finals in April 2018. The nation’s best boy golfers will need to keep a watchful eye on their skirt-clad daydreaming rival.

“We got involved with the series to boost junior golf and we have been delighted to see several players from the SA Golf Development Board excel in the nine events held so far,” says Paul Stewart, Executive Director at Bridge Fund Managers. “It has also been terrific to see the likes of Crystal Beukes and now Jordan Rothman flying the flag for girl golfers. Providing opportunities for this rich pool of young talent will ensure a very bright future for South Africa golf.”

BRIDGE FUND MANAGERS is a specialist asset manager operating in the retail, institutional, private clients and stockbroking markets. At BRIDGE we harbour and nurture our clients’ hard-earned assets. Our unique Payers & Growers® investment methodology is designed and actively managed to assist investors in securing high and growing income streams and inflation-beating capital returns through their investment portfolios. For more information please visit http://www.bridgefm.co.za.