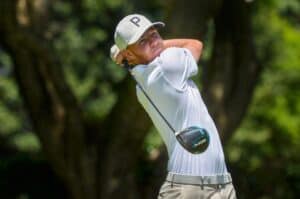 6 February 2022 – Local knowledge & a spurt of confidence after a strong Q-School campaign served Reece Mckain well as he grabbed the outright lead in the first round of the 36-hole Proudfoot Trophy at Royal Johannesburg & Kensington Golf Club on Sunday.

The Balderstone Sports Institute golfer is a member at Royal and he used his acquaintance with the West Course to great effect as he fired eight birdies in a blemish-free round of 64 to lead by a stroke over GolfRSA National Squad member Yurav Premlall.

The Proudfoot Trophy has been running since 1931 and serves as the 36-hole qualifier for the match play section of the South African Amateur Championship.

While the first target for players is to make the top 64 cut to advance to the knockout stage, a win would be a massive achievement on their resume.

“Today was a really good day for me,” Mckain said. “I came in here fresh off a top 20 finish at the Sunshine Tour Q-School First Stage, so I was playing with a lot of confidence. I gave myself a lot of opportunities and a lot of putts dropped.”

The 22-year-old Mckain started slowly, with six straight pars from the 10th hole, but a trio of birdies to finish the nine really set him up for a low round. Further birdies on the 2nd, 4th, 6th, 7th and 9th saw him finish the day in pole position.

“I drove the ball really well today and from good positions on the fairway I was able to attack the flags and fortunately I stuck a lot of approaches close.”

The tournament concludes on the East Course on Monday, with a number of big names firmly in the hunt for the coveted title.

Premlall also started on the 10th hole and fired four birdies on the back nine to get off to a hot start. The reigning Nedbank Junior Challenge champion had reached 7 under through the first 13 holes when his par-putt lipped out on the short par-three 5th hole lipped out for his only bogey on the day.

Premlall, who lifted the Freddie Tait Cup at Sun City in December as the leading amateur in the SA Open, said he did his best to avoid big mistakes out there.

“It’s the first round so I just wanted to get myself into position and the putter was warm, so I made a couple of nice birdies out there. I had a bit of the rest before the SA Amateur, because this is a marathon week. It looked like it did me some good and I just want to build on this start.”

Paarl Golf Club’s Ethan Smith, who finished tie-fourth in last year’s event, before reaching the quarter finals of the match play, finished in third place on 6 under, tied with Magaliespark’s Oliver Goldhill.

Scot Rory Franssen, who won the title back in 2016 at George Golf Club, overcame an early stumble and racked up four birdies to finish alone in fifth place on five-under.

SA Golf Development Board graduate & Ernie Els and Fancourt member Letsoso Lesai fired a round of 69 to lead a group of five players that round out the top 10. These include GolfRSA National Squad member and 2019 SA Amateur runner up Jordan Duminy, Netherlands’ Bob Guerts, Wiehan van der Walt and Bernard Meyer

Defending SA Amateur champion Christiaan Maas fired a round of 1 under par 71 that handed the 18-year-old squad member a seat on the 12-man bus for 19th and with plenty of work to do.