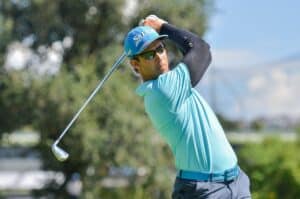 21 February 2022 – Altin van der Merwe got off to a flying start in this year’s edition of the South African Stroke Play Championship, firing a flawless nine-under-par 63 opening round on the Firethorn Course at Randpark.

The 24-year-old Humewood golfer hit the front in the late afternoon, edging early leader Christiaan Maas for the top spot after the GolfRSA No 1 set the clubhouse target at eight-under.

Behind the front runners there are six players tied at six-under, and with five on four-under and 11 players, including reigning SA Amateur champion Kyle de Beer, a further stroke back, it’s shaping up to be quite a week at the home of the Joburg Open.

Unlike Maas, who rode a hot putter from the start, Van der Merwe’s flat stick took a while to warm up.

He turned three-under, but an eagle on the par-five 12th ignited a streak of four birdies on the trot. The Ernie Els and Fancourt Foundation member left a fifth gain painfully short on 17, but on the 18th the putter came to the rescue again.

“I was down the right fairway and hit the approach about 70 feet left of the pin, which was tucked on the right,” he said. “I lagged the putt to a foot and tapped in for a bogey-free 63.

“I played a steady front nine – three birdies and no drops – and that was the big thing for me; to keep a clean card. The eagle on 12th definitely lit a fire in my belly. I didn’t just want to be under-par, I wanted to go really low.”

Van der Merwe’s irons were on the mark, but the putter did all the hard work.

“All the birdie putts were in the 10-to-15-foot range; usually you’d expect to make about 50% of those, but I guess it was my lucky day with the putter,” he said. “I was a bit disappointed that he gave up on me on the 17th, but he came through on 18. To have a one-footer left to stay bogey-free was a little nerve-wracking but I’m just happy I got it done in the end.”

Maas hit his stride early and reeled in three birdies in a row from the second.

The Pretoria golfer didn’t relent, firing five on the bounce from the eighth and another arrived on the par-five 14th after a par on 13. “My run ended on the last, but I actually played the 18th quite well,” said the 18-year-old GolfRSA National Squad member, who will be heading to the University of Texas later this year.

“I hit a soft 3-wood and it ran through the fairway. I had 168m left, and I thought about hitting an 8-iron, but I thought it would fly. So, I took 9 and it flew the green, pitched and rolled back into the bunker. It was on the downslope, and somehow, I left the bunker shot on top of the slope. And then the putt lipped out.

“I really pleased to start off well, for once. Every other year at Randpark I’ve opened with a one-under or level round, and have had to push from there, so hopefully I can keep this form going and continue to play like I did today.”

Rory Franssen from Scotland, who lost the SA Amateur Championship final a fortnight ago, is firmly in contention at four-under, alongside Ireland’s Robert Moran, Andrew Georgiou, JP van der Watt and Vuyisani Makama.

Makama, a member of the South African Golf Development Board and a student at the BSI Sport Institute, reeled in three birdies in his outward nine, and erased a double on the short 17th with another hat-trick of gains coming home. The 15-year-old was thrilled to finish inside the top 10 in his first proper tour of the course.

“We’ve played some high school tournaments here, but we only play nine holes, so I didn’t really know the other side of the course,” he said. “I learned so much competing in the SA Amateur and playing Casey Jarvis in the match play, and I’m really proud of how I handled myself out there.”

“It was a great round today, but I think it will get tougher as we go on,” he said. “Randpark has been hit by so much rain since last September, and the Joburg Open even had to be shortened due to flooding. The rain on the weekend softened up the greens again, but they firmed up this afternoon and if the good weather holds, they will get tougher. Right now, it feels pretty good to be a strong position on day one of the championship. I just need to keep it going, play hole-by-hole and not get ahead of myself.”