Winter, who turned 50 this year, has been the undisputed queen of the GolfRSA national championship since its inception in 2010.

She became the first two-time winner with her first set of back-to-back wins in 2011 and 2012 at Kingswood Golf Estate and in 2016, she completed a hat-trick of wins at her home course, George Golf Club. A year later, Winter repeated the feat for a second set and a record fourth victory at Kimberley Golf Club. Her supremacy in the flagship event was interrupted by Vicki Traut, who won three titles on the trot from 2019, but Winter reclaimed her crown once again.

Firing rounds of 76, 76 and 73, she wrapped up title No 5 with a four-shot victory, thwarting the Western Province golfer’s bid to make it four in a row,

“The biggest source of pride for me is winning again. It has been a while for me and that has bothered me a little bit because I knew I had the game to win again,” Winter said after rolling in the winning putt to the thunderous delight of the home crowd and peers. “I didn’t play well the last three years, but I felt really good about my game this year. I felt like I could really compete this year, and to get it done feels incredibly special.” 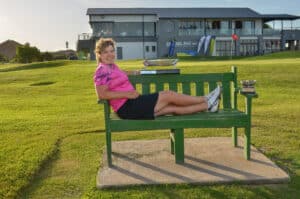 Winter’s achievement was made even more memorable as she also won the Senior Trophy, becoming the first Championship winner to also lift the senior title. “I really felt the love and support out there, even from my playing partners. I’m just thrilled to be back in the winner’s circle and to be holding these trophies.”

In 2004, a youthful Winter led the Southern Cape team to their first victory in the 72-Hole Team Championship at Mossel Bay Golf Club and the then dominant amateur in South Africa, Ashleigh Buhai (nee Simon), for the Individual title.

“I was definitely channelling the positive vibes from that achievement,” Winter admitted. “Mossel Bay has always had a special place in my heart since that big win, and I was feeling very inspired and confident coming into this year’s event.

“But the spirit in which this championship is played also plays such a big role in how you perform. We are all out there to win, but at the same time we are cheering each other on, applauding the great shots and commiserating on the losses. It’s fantastic to see how the women’s mid-amateur circuit has grown and this championship, especially. The camaraderie is unbelievable and it’s undoubtedly my most favourite event of the year.” 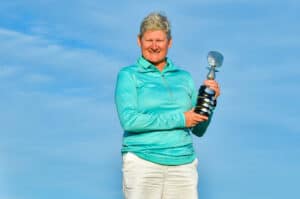 Hermien Jones from the Eastern Province claimed her first national title in swashbuckling style, staving off strong challenges down the last few holes from Boland’s Russo Roberts-Gouws and Carina Venter from Free State to be crowned the 2022 Silver Division champion.

Jones and Venter began the second nine shots adrift of Roberts-Gouws, who opened with an 82 to share the lead with GolfRSA B-Division Champion of Champions winner Sanet Pieterse.

An 84 in the second round boosted Jones into the top 10, but she was still well off the pace. Pieterse led the field on 169, Roberts-Gouws was one shot adrift, and Theron was fourth on 172, courtesy of an 81.

In a dramatic final day in windy conditions, the lead exchanged hands numerous times throughout the round, but in the end, it came down to three. Tied for the lead with four holes to play, Jones kept calm as her rivals buckled under pressure.

Jones parred the last two holes for an 82 to seal a two-shot victory. Roberts-Gouws closed with 89 to finish second, and Theron finished a further shot back in third after carding 88.

“It’s incredible. To be brutally honest, I had no idea what my score was until about three holes from the end. I made a crucial par-save on 17 and someone told me I was leading by one shot. I needed to do the same on the last hole and the par putt dropped,” said the delighted Gonubie Golf Club member.

“I can’t say that it was one of those days where everything went well, but I hit the driver great and I holed some beautiful putts. I left quite a few out there, but I really shouldn’t complain. The par-saves on the last two holes were obviously crucial; it sealed the win for me. I must admit the emotions came flooding in after the last putt after keeping it together all day. It’s just such a wonderful feeling to come away as the winner.”

Louise Olivier put an exclamation mark behind her comeback year by successfully defending her Bronze Division title in Mossel Bay.

Showing the same depth of character that carried her through her battle with breast cancer this year, the Boland golfer braved the challenging conditions that tormented the field over three days and slept on the lead for two night.

Having posted rounds of 37 and 34, she completed the wire-to-wire performance with a final round of 35 points to win by four.

“I can’t describe how much this means to me. It’s been a truly tough year, and I’m over the moon,” said the Devonvale Golf & Wine Estate member.

No victory ever comes easy, and wire-to-wire victories are even more difficult, as they require a player to deal with the inevitable thoughts of winning for days on end. “After the first day I told my friends not to celebrate yet, because I can’t control what the other players do.

“But after the second round, I allowed myself to think once or twice that I could do it. I just stuck with the same strategy all three rounds, trying to hit as many fairways and greens as possible and to keep the mistakes to a minimum. I very nearly didn’t come this year, but I am so happy that I decided in the end to play. It’s been a rollercoaster year, and to finish it with this trophy back in my hand is incredible.”

Congrats to the 54 first-timers who teed it up in the 2022 SA Women’s Mid-Amateur Championship at Mossel Bay Golf Club!

In addition to celebrating the trio of champions, the 2022 edition of the GolfRSA flagship event also recorded the highest number of entries since its inception in 2010.

Nearly 150 women teed it up at Mossel Bay Golf Club, with a stunning 54 first-timers making their debut across the three divisions in the Southern Cape!