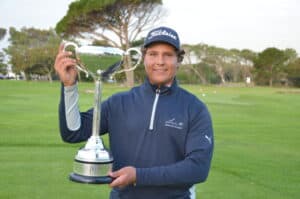 Three weeks after winning the Nomads South African Junior International, the 17-year-old from Pinnacle Point put together rounds of 69, 66, 66 and 65 in challenging conditions to blow the field away with a score of 22 under par.

To put his performance in context, only three players finished under par as rain and wind lashed the course for much of the 72-hole event. Potgieter’s nearest challenger, Malan Potgieter from Kirkwood, finished at 2 under par for the week, while GolfRSA National Squad member Jaden Deltel from Bryanston finished third on 1 under.

“It’s been a great week and I’ve been solid every day,” the new champion said, “although I am grateful that I was on the right side of the draw to take advantage of the better weather.

“I like to play aggressive golf and give myself as many birdie opportunities as I can, so I’m pleased that I was able to convert a few of them.”

There was certainly no shortage of red numbers from Potgieter, who knocked in 26 birdies during his winning run, against only four dropped shots. The back nine in particular was shown no mercy, as he played the holes in 19 under for the week, demonstrating a steady mix of power off the tee and a very sharp short game. 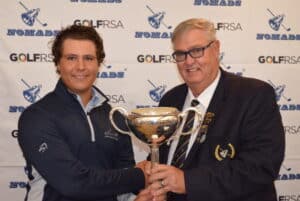 Potgieter was born in South Africa, but his family emigrated to Australia when he was eight. After nine years of living in Perth – during which time he won the Western Australia Amateur and finished runner up in the Australian Amateur – the family returned in December last year, settling in the Southern Cape, where he was invited to join the Louis Oosthuizen Academy.

Just a few months into his debut on the GolfRSA circuit, Potgieter has his name on one of the country’s most prestigious junior titles, alongside the likes of Major champion Charl Schwartzel and PGA Tour winners Dylan Frittelli and Brandon Stone.

“It feels amazing,” he said. “But I can’t really celebrate too much as I’ve got to turn my attention to the match play now, and I want to try and keep the momentum going. I’ll go out and play the same golf, with the same strategy and try and make as many birdies as I can.”

Potgieter’s recent success, which includes a tie for third in the African Amateur Stroke Play Championship at Leopard Creek, has helped boost him up the amateur rankings, both in South Africa and in the world amateur rankings.

Ranked 187th in the world prior to the Nomads SA Boys Under-19 Championship, he now has a realistic chance of making the International Team for the Junior Presidents Cup.

“It’s definitely on my radar,” he admits. “These events have really helped my ranking. The competition is so strong over here, with so many good players, big tournaments and great golf courses that it’s helping me to improve my game and gain huge amounts of experience.”

He launches the match play component of the Nomads SA Boys Under-19 Championship with a match against Western Province’s Jan-Stals van Rooyen. The top 32 players made the knockout stage, which concludes with a 36-hole final on Saturday.