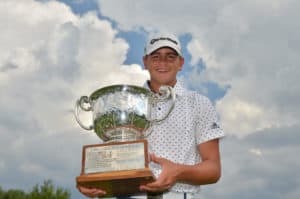 Casey Jarvis etched his name into the record books as the youngest winner in South African Stroke Play Championship history when he claimed the prestigious title with a nine-stroke victory at Randpark Golf Club; credit Ernest Blignault.

13 February 2020 – Casey Jarvis etched his name into the record books as the youngest winner in South African Stroke Play Championship history when he claimed the prestigious title in dominant fashion at Randpark Golf Club on Thursday.

At 16 years, 6 months and 17 days, Jarvis broke a record that had been held for 51 years when he triumphed with a winning aggregate of 25-under-par 263 – a full nine strokes clear of his nearest competitor, Port Elizabeth’s Kyle de Beer.

The Boksburg teenager eclipsed the previous mark held by the renowned Dale Hayes, who won the first edition of the flagship event at 16 years and 8 months at Humewood Golf Club in 1969.

In January, Jarvis shot to No 1 in the GolfRSA Open Amateur rankings with successive victories in the Free State and Gauteng North Opens. He briefly relinquished the top spot on Monday to African Amateur Stroke Play Championship winner Martin Vorster, but this latest victory has propelled the State Mines golfer back to the summit.

His performance around the 6,746-metre, par-72 Firethorn Course, where a month earlier the European Tour’s elite players battled it out for the South African Open Championship, gave new meaning to the old cliché of ‘he came, he saw, he conquered’.

Jarvis laid down a marker with an opening six-under-par 66, opened up a two-shot lead with a second round 67 and stretched his advantage to four shots with a round of 65 on moving day. Over 54 holes, he racked up 22 birdies and surrendered just four shots. That birdie tally would swell to 27 as the State Mines golfer toured Firethorn on the final day in flawless fashion. 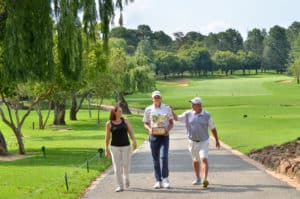 You are only as strong as the support system around you – Kevin and Kim Jarvis sharing in Casey’s SA Stroke Play triumph; credit Ernest Blignault

He opened with three straight pars, followed by a trio of birdies from the par-five fourth and made the turn on 21-under. Leading De Beer and Irishman Rowan Lester by eight shots, Jarvis put on a real show on the back nine – a fourth gain on the par -five 12th, a chip-in eagle at the par-five 14th and a final birdie at the par-four 16th.

Two rock solid pars on the closing holes put an exclamation mark behind his feat.

His success came down to an unwavering belief that he could win, his affinity for the Firethorn Course and his partnership with legendary caddie Tiger Lekhune – the man who once famously told Tiger Woods “Nice to meet you, but I’m the original Tiger”, and who carried the bag for most of Major champion Nick Price’s 48 victories worldwide. He also helped steer Jarvis to victory in Randpark in the Joburg Junior Open last December.

“My dad almost always carries for me and we’ve won some big ones,” said Jarvis. “Tiger took the bag for the Joburg Junior Open, so I asked him to carry for me again this week. He’s been at Randpark for more than 25 years, and he reads the greens better than anyone I know. 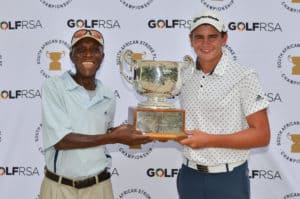 “He is also good at calming me down. I am very fast. I walk fast, I hit fast and I putt fast. Because he is slower, he slows me down. It actually helps me to focus. He is so experienced and he knows just when to speak up and when to back off. It’s been a great week for us.”

As for his love affair with Firethorn, Jarvis says it is all about the greens.

“I love these greens. They are so pure and run so true. If you steer your ball on the right line and with the right pace, then the putts drop centre cup every time. I drove the ball really well and barely missed a fairway or a green all week. And my putting was on song.

The teenager reflected on the week, and a final round that will live long in his memory.

“This has been a dream. To win the SA Stroke Play is the best achievement of my career. It was a magic week where I really played my best golf and got rewarded for it. Now I’m going to switch off for a day and then turn my focus the AON SA Amateur Championship.

“My other goals are to lift the Proudfoot Trophy and the SA Amateur title. If I can play well in the qualifier and win it, it will put me in a good position for the match play. I love Royal Johannesburg and Kensington; it’s one of my most favourite courses, so taking a game this solid to the SA Amateur feels really good.” 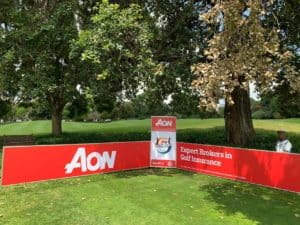 The ground-breaking AON SA Amateur Championships will see the Women’s and Men’s Championships being played concurrently on the East and West Courses of Royal Johannesburg and Kensington Golf Club from 16-21 February.

Jarvis will not be the only player to fancy his chances next week.

GolfRSA National Squad stablemate Kyle de Beer carded rounds of 67, 71, 67 and 67 to finish alone in second on 16-under. The Ernie Els and Fancourt Foundation will take a healthy amount of confidence to the flagship event.

As will Irishman Caolan Rafferty – a semi-finalist in last year’s SA Amateur. The Dundalk golfer closed with 67 to finish in third on 15-under. South African pair Keagan Thomas and Kieron van Wyk produced a pair of 68s to share fourth a further stroke back.