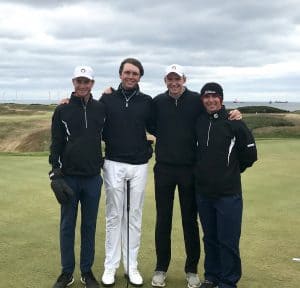 The 20-year-old George golfer is the sixth South African to reach the last round.

Just 18 at the time, the upstart from Springs stunned the golfing world when he beat Scotsman Ronnie Slade 3 & 2 at Carnoustie.

Now Rebula has the chance to put another South African name on the trophy and, if he wins, he’ll also have bragging rights over his famous uncle Ernie Els.

The four-time Major champion had three stabs at the title and made it to the final on his third try in 1988…on the bag for Ben Fouche, who lost by one hole to Sweden’s Christian Hardin at Royal Porthcawl.

Tom Sloman dispatched compatriot and top qualifier Wilco Nienaber to reach the top eight, but that is as far as the Taunton golfer would go. Rebula avenged his fellow GolfRSA National Squad team-mate with a 2 & 1 win and mowed down Mitch Waite 6 & 4 in the semi-final.

“To be honest, I have some mixed emotions, because it feels like everything happened so quickly today, but mainly I’m just really, really happy,” said Rebula,

“This is what we all work for; to reach the final of one of the biggest amateur events in the world. I feel like I prepared really well for this week. I struck the ball well all week and I limited the bad shots. Now I’m just really excited for the final.”

Rebula went 1-up with a par at the fourth against Sloman and went 2-up with a birdie after a great trap shot out the bunker at six.

“He dropped at seven, but I had a double bogey at nine to turn 2-up,” said the Auburn University golfer. “I dropped another shot at 13, but I holed-out from the bunker at 14 for birdie to go 2-up.”

The downhill par three 17th played downwind and Rebula short-sided himself in the bunker and faced a tough lie. He hit another great bunker shot to just outside a foot and wrapped up the match when Sloman missed from 20 foot.

Pin-point irons forced Waite to concede the second and third holes and a bogey at four saw Rebula go 3-up. The Filton golfer conceded again at the fifth and ninth, and the pair turned with the South African 5-up and clearly in control.

“I had one of my best ball-striking days and I kept it in play, especially off the tees,” said the Ernie Els and Fancourt Foundation member. “The wind was blowing pretty strong and I put a lot of pressure on Mitch with clutch putts that kept the momentum going.”

Rebula overturned a bogey at 11 with a birdied 12 and the pair spit the 13th in pars. It was game-over when Rebula hit another pin-seeking iron close to the pin on 14. Waite’s chip came up woefully short and he conceded the hole.

The former Sanlam SA Amateur finalist settled in to wait for the outcome off the all-Irish semi-final between Dawson and Conor Purcell. Dawson triumphed 3 & 2.

“It’s going to be a long day, and I’m really glad I’ve got Matt (Saulez) on the bag again,” said Rebula. “We’ve had a lot of fun in the last two days and that’s really what I need going into a 36 hole final. Someone that will entertain me between shots, keep my focused in the serious moments and keep my head in the game for what promises to be a really tough contest.”