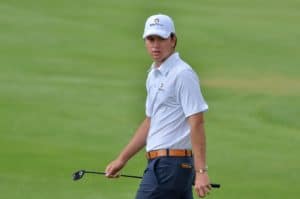 PINEHURST, North Carolina (13 August 2019) – GolfRSA National Squad member Jovan Rebula was one of only 27 players who broke par in Monday’s opening round of the 119th U.S. Amateur Championship at Pinehurst Resort & Country Club.

The Auburn University senior made a great recovery after a stumbling start to post a one-under-par 69 on Course No 4, which earned him a share of 19th in the 312-strong starting field on day one of the 36-hole stroke play qualifier.

Rebula began his campaign in the afternoon field on the par five ninth.

Level through the turn, the Ernie Els and Fancourt Foundation member birdied the first and offset bogeys at the third and sixth holes with further gains on four and eight for a top 20 spot.

The George golfer, who is ranked 28th in the world amateur golf rankings, moves to the tougher Course No 2 in today’s deciding round.

He is four shots off the pace from world number eight Brandon Wu, who took pole position on five-under. The 22-year-old American made three consecutive birdies and an eagle on holes 14 to 17 on Course No 4 to open up a one shot lead over compatriots Trevor Werbylo and Palmer Jackson.

Only four players managed to break par on No 2, and the leading rounds of two-under 68 were posted by KeNako Academy old boy Julian Sale from France and Americans William Walker and Van Holmgren.

South Africa’s own ‘Beef’, Devon Hopkins made the most of an early start on Course No 4.

The Florida resident had a tidy outward loop featuring two bogeys and a birdie at the par four 16th, but he unravelled on the back nine, dropping five shots. A four-over 74 will see Hopkins start the second round on Course 2 in joint 132rd.

Fellow South African Chris Woollam faced the challenging No 2 – site of three U.S. Opens and the 2024 U.S. Open – on day one.

The top 64 players for the match play stage will be decided after today’s second round and the KwaZulu-Natal golfer will be hoping to go low on Course 4 today after an opening six-over-par 76. Woollam, a freshman at Louisiana State University, mixed two birdies with five bogeys and a double bogey at the par four 14th to tie for 179th.