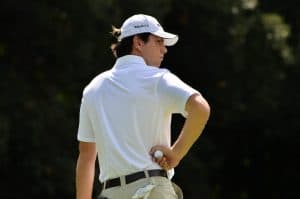 Reigning Amateur champion Jovan Rebula led the amateur challenge in the first round of the SA Open, hosted by the City of Johannesburg, with a four-under 67 at Randpark Golf Club; credit Ernest Blignault.

JOHANNESBURG, 6 November 2018 – Reigning Amateur champion Jovan Rebula laid down an early marker in the hunt for the Freddie Tait Cup after day one of the South African Open Championship, hosted by the City of Johannesburg at Randpark Golf Club.

The Auburn University stand-out navigated the Bushwillow course in four-under 67 to finish in the top 20. He lags five off the pace from first round leader Louis Oosthuizen, whose flawless 62 at Bushwillow went unchallenged, and finished one shot shy of his famous uncle, four-time Major champion Ernie Els, who also played Bushwillow.

“I had my dad on the bag and we really had a lot of fun out there,” said Rebula. “We took quite an aggressive approach, because with a field this size, you need the early jump and the Bushwillow course is the more score-able of the two.” 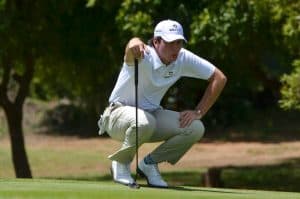 Reigning Amateur champion Jovan Rebula in action during the first round of the SA Open, hosted by the City of Johannesburg at Randpark Golf Club; credit Ernest Blignault.

The Southern Cape golfer made a fast start with back-to-back birdies and turned three-under after a third gain at the par three sixth.

“It was nice to fly out of the blocks; it set a positive tone for the round,” Rebula said. “I had two more birdies on the back nine, but I dropped one at 15. It can always be better, but I’m happy to start Firethorn on Friday at four-under.

“Conditions were pretty tough in the swirling wind, but I felt really comfortable out there. It was really great to have all the family supporting me, because I don’t see them that often. My dad and I chatted between shots, my mom and my best friend walked with us and my grandfather also came out to watch me after Uncle Ernie finished.”

The Ernie Els and Fancourt Foundation member hopes to produce a similar score in Friday’s second round at Firethorn.

“It’s definitely the tougher of the two courses,” he said. “You have to be really accurate off the tees and I am hitting it really straight at the moment. Good tee shots set me up for a good score today and I am not get defensive on Firethorn. There are some holes you can attack and I plan to do just that.” 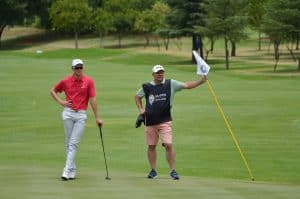 SA’s number 1 ranked Wilco Nienaber in action during the first round of the SA Open, hosted by the City of Johannesburg at Randpark Golf Club; credit Ernest Blignault.

Nienaber stumbled with a double bogey at the second hole at the Firethorn Course, but the big-hitting Bloemfontein golfer rallied with three birdies on the back nine and an eagle at the par five 14th saw him post two-under 69 for a share of 46th.

Germishuys from Western Province was three-under after nine holes, but bogeyed 10 and 11 at Firethorn after the turn. He got it back to two-under with a birdie on 17, but a bogey finish dropped the Ernie Els and Fancourt Foundation golfer to a tie for 63rd on one-under 70.

GolfRSA National Squad players Christo Lamprecht, Yurav Premlall and Matt Saulez round out the bottom of the amateur leaderboard.

The Louis Oosthuizen Junior Golf Academy member signed for a one-over 72 at Bushwillow. 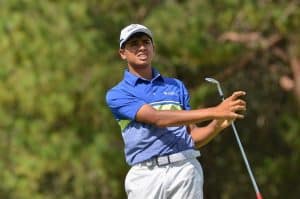 Yurav Premlall became the youngest-ever amateur at 15 years and 5 months to tee it up in the SA Open with his debut at Randpark Golf Club; credit Ernest Blignault.

Edenglen’s Premlall won the Country Club Johannesburg Qualifier on six-under-par 66. This earned the Glendower golfer a historic debut on the Firethorn Course as the youngest amateur at the age of 15 years and five months to tee it up in the world’s second oldest National Open.

“I definitely felt the nerves at the start, but I settled down and played the back nine a lot better,” said the Golf School of Excellence player. “I’m looking forward to playing Bushwillow now. I hope I can put a few birdies on the card and dip under par, because I’d love to be here for the weekend.”

Matt Saulez from Durban will have to get the putter going at Bushwillow in round two after opening with a nine-over-par 80 at Firethorn.