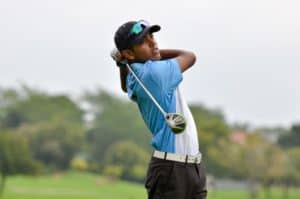 Bryanston junior Nikhil Rama opened up a three-shot lead at the 36-hole mark of the Friends of Engelberg Challenge, hosted by Anna Becker-Frankel at Devonvale Golf and Wine Estate; credit Ernest Blignault.

10 August 2019 – Gauteng junior Nikhil Rama will take a three-shot lead into the final round of the Friends of Engelberg Challenge, hosted by Anna as he goes in search of his first national title.

The Bryanston golfer opened with a four-under-par 68 in the national boys and girls event and he clung to pole position with a second round 70 at Devonvale Golf and Wine Estate on Saturday.

Western Province golfer Tyran Snyders – the first South African champion of the prestigious North and South Junior Championship at Pinehurst in 41 years – moved into second on his own with rounds of 71 and 70.

Francois Cilliers from Strand Golf Club sits four off the pace with successive rounds of 71.

Rama began the first round with a bogey start, but rallied with three birdies on the bounce from the ninth to take the lead.

He stayed ahead of the field with an eagle on the par five closing hole and started the second round with a one shot lead over Mostert. A trio of birdies from the second increased his cushion, but Rama let the chasing pack, headed by Snyders, back in when he dropped three shots in succession from the sixth. A brace of birdies at 16 and 17 restored his three-shot lead.

Snyders was two-under through the turn.

The Durbanville golfer birdied the first and cancelled a bogey at the second with an eagle at the par five third. He moved to five-under with a birdie at the fourth, but back-to-back bogeys at the seventh and eighth holes saw him slip three shots off the pace.

Cilliers only had two bogeys in 36 holes and if the Bridge Fund Manager Junior Series winner can get the putter going in the final round, he could set a cat among the pigeons. 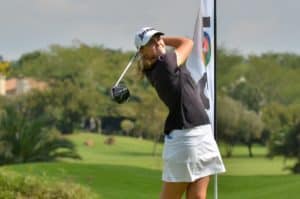 The Western Province golfer opened with an expensive 78 after dropping seven shots in her first round, including a double bogey at the par four 14th. The Durbanville golfer handed in a flawless scorecard after her second trip around the championship layout, though.

Williams followed an opening birdie with another gain at the third, and broke a run of seven pars with a third birdie at the par five 12th. The GolfRSA Elite Squad member will take a one-shot advantage into the final round over Boland junior Megan Streicher.

Streicher, who came up trumps in the Individual Competition in the SA High School Championship at Koro Creek, led the first round with a one-over 73, but an eagle-three at the second and birdie at the ninth was not enough to limit the damage of half a dozen bogeys.

She signed for a round of 75 that dropped her to joint 17th on four-over.