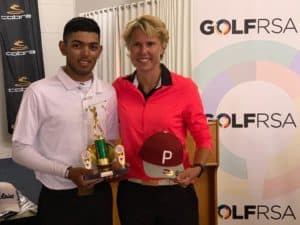 The 17-year-old Rama was pushed all the way by reigning North and South Junior champion Tyran Snyders, but held his nerve to post a final round one-under-par 71 to win the championship on seven-under 209.

Snyders from Western Province took second on five-under after carding 70 on the last day.

The week belonged to Rama, who surged into the first round lead with a four-under 68 and held on to pole position with a second round 70.

The Bryanston junior carried a three-shot lead over Snyders into the final round, and made light work of the heavy downpour over the first eight holes. He moved to nine-under with birdies at the second, fourth and sixth holes, extending his lead over Snyders to five shots.

However, as conditions worsened, Rama let four shots slip coming home and Snyders increased the pressure with birdies at the 15th and 17th.

The tournament leader rallied with gains at the par five 11th and par four 15th and clinched the overall title with a two-putt par at the closing hole.

“I am super stoked with my first national junior win,” said the 17-year-old Rama.

“I struggled to get the putter going in the first round, but after I birdied the ninth, the putts kept dropping. My strategy for the tournament was to try to keep the ball in play and to hit greens in regulation to give myself chances to score and I did that well in the first two rounds.

“The sweeping rain and strong wind made conditions really tough on the last day. I kept my head down and tried to remain focussed on my own game. The goal was to save pars, and to limit my mistakes.

“My bogeys at nine and 12 were soft bogeys. On 14, I hit it left over the hazard into the flowerbed. I had to take an unplayable and hit my third 45 metres right of the green. I flopped my chip-shot over the bunker and holed a 25-footer for great bogey that kept the moment going.

“I was able to birdie 15 to get the shot back and keep my lead. It feels really amazing to finally get the job done. A big thank you to Anna Becker-Frankel for bringing this new national event to our annual calendar and my parents for bringing me to Stellenbosch to compete this week.”

The leading girls were Megan Streicher from Boland and Western Province’s Kaylah Williams, who carded respective final rounds of 74 and 75 and tie for 10th on six-over.

Frankel-Becker – head professional at Devonvale Golf and Wine Estate and assistant coach of the GolfRSA / Womens Golf South Africa Elite, B and Talent Identification Squads – was thrilled with the success of the inaugural event.

“I was so pleased to see so many juniors come from all over South Africa support the first Friends of Engelberg Challenge,” Frankel-Becker said.

“I approached some of my international clients for sponsorship and it is really gratifying to show our sponsors, especially Peter Burkhalter from Engelberg, a small town in Switzerland, Dieter Kőhne and my father that their investment in junior golf in South Africa is justified and so appreciated.

“I am thrilled with the success of the first event, especially the enthusiasm of the juniors in really tough weather conditions on the final day. The juniors embraced this new national event and we look forward to growing this to become one of the most popular stops on the junior circuit.

“As an ambassador for Puma/Cobra, I am also very grateful for their support and the prizes they so generously donated. We would also like to thank The ProShop for their contributions, GolfRSA for the Titleist prizes and Boland Ladies Golf Union for their support.”