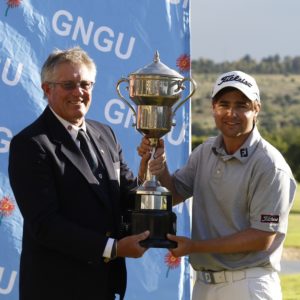 28 January 2018 – Ekurhuleni amateur Kyle McClatchie showcased his future potential with a runaway seven-shot victory on the Big Easy Tour last year. Just two weeks ago, the 20-year-old rising star closed out a top 12 finish in the BMW SA Open at Glendower Golf Club, but if anyone still had their doubts, the class act in the making put all reservations to bed with a seven-stroke triumph on 25-under-par 263 in the Gauteng North Open on Sunday.

McClatchie carded an opening round 65 and second round 72 at Waterkloof Golf Club to start the final 36 holes four strokes behind local hope James du Preez.

An eight-under-par 64 boosted the GolfRSA National Squad player to 15-under. He only led by a slender shot heading into the final round, but he never gave the chasing pack a chance as he raced to the finish line with a flawless 10-under 62,

His final two rounds featured a lone bogey, 15 birdies and a pair of eagles. The 62 was his lowest tournament round ever; the 263 his lowest 72-hole career total.

The country’s top ranked player in the World Amateur Golf Rankings said it came down to mind-set.

“I told my dad after the second round that I was shooting two flawless rounds on Sunday,” said the Serengeti golfer. “I made 12 birdies and an eagle in the first two rounds, but I dropped too many shots. The birdies were there for the taking; I just needed to keep the card clean.”

He did have one blemish, though; a bogey at the par-four 12th in the third round.

“I was happy with the 64, because it was a really solid round, but to shoot 62 with no bogeys was an out-of-body experience,” McClatchie said. “Every shot was just about perfect.”

During the GolfRSA National Squad Tour to the United Kingdom last year, the Wanna Be A Champion Academy golfer became only the fourth South African to lift the English Men’s Amateur Stroke Play title. In August, he was one of just three South Africans to qualify for the US Amateur Championship in California and the only local lad to reach the match play stage.

Throughout the season, his biggest goal was to reach a greater level of consistency and the Serengeti golfer is happy with how his game has progressed.

“I have been striking the ball really well over the last six months said McClatchie, whose last victory on the national amateur circuit was the 2017 Western Province Match Play Championship in April.

“My overall game is really solid, especially the short irons, wedges and putter. It’s great to set yourself goals and achieve it. “I’m very happy with the advances I’ve made and really pleased to finish in the winner’s circle again.”