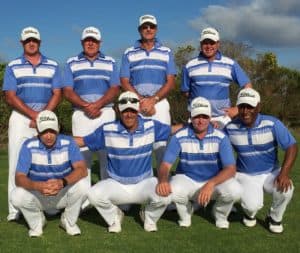 Team Mpumalanga made some huge strides on day 3 of the SA Mid-Amateur Inter-Provincial at Oubaai Golf and Spa Resort; credit GolfRSA.

11 October 2017 – Central Gauteng has one hand on the trophy in the A-Section, but the battle for promotion is far from a foregone conclusion after three days of action in the South African Mid-Amateur Inter-Provincial at Oubaai Golf Resort and Spa in the Southern Cape.

Central Gauteng will enjoy a well-deserved bye on Thursday after extending their winning run with a double whammy on day three against North West and Boland .With victories over both teams, the side cemented the top spot in the standings with 10 points.

Central Gauteng rode a 4 – 0 lead over North West to a 9 – 3 victory with five wins in the singles.

Western Province moved to second in the log on eight points with a 7.5 – 4.5 result against Gauteng North, but defeat to Ekurhuleni on day two could come back to haunt them.

The defending champions also have a fourth round bye. With a 10 games point deficit, Western Province not only have to win Friday’s match against the log leaders, but they need a white wash to keep Central Gauteng out of the winner’s circle.

North West bagged their first points when they downed Boland 7.5 – 4.5. They face Ekurhuleni – the dark horse on six points and currently fourth in the log – on day four.

Ekurhuleni has two matches left and 26 games points. Big wins against North West and KwaZulu-Natal on Friday could see the 2014 champions in the mix, especially if Western Province can halt the Central Gauteng Express.

Thursday is last chance saloon for Boland, KwaZulu-Natal and Gauteng North, who face each other in the round-robin format.

With a bye on Friday and zero points, Boland must pull out all the stops to avoid the wooden spoon and the Daisies, currently on the bottom of the ladder with zero points and trailing both teams in games points, are under the same pressure. KwaZulu-Natal has two points after beating North West, but another victory will keep them in the top tier.

Eastern Province was flawless over the first two rounds, but Southern Cape handed the log leaders a 10.5 – 1.5 drubbing on Thursday to throw the B-Section wide open.

The host union fired in the foursomes to collect all four points on offer and continued their assault in the singles. Nicholas Mitchell, Meyer Potgieter, Anton Prinsloo, Ivan Williams, Henk Geldenhuys and Heinrich Frylinck racked up six points.

Attie Burger briefly stemmed the bleeding for Eastern Province when he eliminated Ian Norgarb 3 & 2, but Marlo Pienaar denied the Bay Boys another point with par the final hole to halve his match against Johan Coetzer.

With eight points and 34.5 games points, Eastern Province still top the log, but three teams are baying for their for blood.  With a bye on Thursday, the Eastern Province lads could be walking into a storm in their final round clash against Mpumalanga.

Southern Cape is tied for second with Mpumalanga and Free State, but with six points, and 26 games points in hand, a solid innings against Border and Northern Cape on day four could give Southern Cape a realistic chance to secure the promotion.

Mpumalanga and Free State are still very much in the running, though.

Mpumalanga led Border 3.5 – 1.5 after the foursomes and comfortably won the match 8 – 4 with victories from Brian Naidoo, Eddie Daniel, Edward Wilken and Christiaan de Beer. Although they lost to Free State in a tightly-contested tussle, Mpumalanga leads the trio with 31 games points.

Free State bagged 6.5 games points from their match against Mpumalanga and pushed their tally to 29.5 when they mowed down Border 8.5 – 3.5. A solid performance against Limpopo on Thursday could see Free State in the drivers’ seat ahead of their final round clash with Southern Cape.