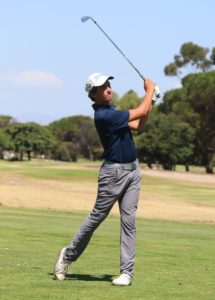 Travis Procter began 2020 in style by shooting a 2-under-par round at King David Mowbray Golf Club on Friday, 10 January to win his second Bridge Fund Managers Junior Series title of the season.

Travis, who enters Grade 11 at Curro Durbanville this year, said the key to his win was playing “smart golf”.

“The course is tree-lined and the rough is quite thick, so you need to keep the ball in play,” explained the 16-year-old. “King David Mowbray is one of my favourites because you have to think your way around; on a more open course it is easy to lose concentration and make stupid mistakes.”

Travis will join other #BridgeJuniorSeries tournament winners at the regional final in April 2020, where the prize is an all-expenses paid trip to the North and South Junior Championship at Pinehurst, North Carolina which has hosted three US Opens, the PGA Championships and the Ryder Cup.

“I have never played in the USA before and it is a dream to play Pinehurst,” said Travis. “I am hoping to do well in the regional final, but the field is going to be very strong.”

The decision moment in the round was on the par 5 14th when Travis launched a drive which soared with the South Easter and left him with just a gap wedge for his second. A simple birdie gave him the lead which he maintained by making impressive pars on the four remaining holes.

Because Travis had already won a #BridgeJuniorSeries title at Boschenmeer, Paarl in September last year, the three runners up at King David Mowbray had a playoff to see who would join him in the elite field for the regional final. Jan Stals van Rooyen of Clovelly showed nerves of steel to win against Matthew Lotz of Atlantic Beach and Bobbi Brown of Steenberg.

The #BridgeJuniorSeries launched in 2017, is managed by the SA Golf Development Board and endorsed by GolfRSA. Open to boys and girls in the U13 and U19 divisions, it is played across 18 tournaments hosted by leading courses countrywide. Prizes are sponsored by TaylorMade South Africa, who has partnered with the series since its inception.

Golfers in the South have one more opportunity to qualify for the regional final when the magnificent Oubaai course hosts the #BridgeJuniorSeries on 26 January 2020.