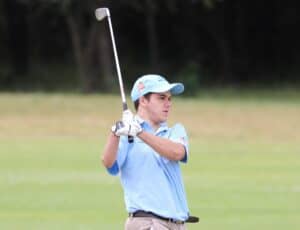 22 August 2021 – Jabu Price-Moor might be starting the Canon Kwazulu-Natal Disabled Open on Monday slightly ‘undercooked’, but the KwaZulu-Natal rising star is nonetheless is targeting a top-10 finish at Mount Edgecombe’s The Woods course.

After being in a car accident as an infant, Price-Moor was placed in a full-body cast. Unfortunately Jabu spent too long in the cast as he and his family awaited an appointment with a surgeon. Consequently, scar tissue formed over the ends of the nerves which had snapped off the spinal cord and left Price-Moor with paralysis of his right-arm.

Nevertheless, Price-Moor was a very happy baby which prompted his dad to nickname him Jabu – short for Jabulani – which means rejoice in Zulu. The name stuck and today people seldom if ever call him Cameron – his birth name.

Throughout his life Price-Moor exhibited a steely refusal to become bogged down by his disability.

More to the point: He has thrived in spite of it. As a nine-year-old he held the Zambian U/10 400m Butterfly national record among able-bodied swimmers.

Swimming was just one of a number of Price-Moor’s sporting pursuits and in many ways he feels his disability opened his eyes to what he was truly capable of.

“Without a doubt I think that it had a major positive impact on my life being active because my disability opened my eyes to my true ability. Through living an active lifestyle of playing sport,  swimming, hunting, farming, all that kind of stuff helped me deal with the disability and I wouldn’t change it.”

Given Price-Moor’s love of sport, it’s no surprise that when his friends gravitated toward golf in the latter stages of their school careers that he did too.

“As with any of my other sports basically a lot of my friends were playing golf at high school properly and I decided that I’d tried hockey and everything like that and I’d like to try golf.”

Price-Moor’s talent for the game was readily apparent as he claimed victory in the Stableford division among Les Autres golfers at the 2016 SA Disabled Open though the triumph was not without a late hiccup.

While Price-Moor turned out for Team North at the SADGA Provincial Challenge earlier this year, preparations for the Canon Kwazulu-Natal Disabled Open have taken a back-seat owing to competitive equestrian riding commitments.

“I haven’t played as much golf as I would have liked to, building up to it,” he says.

“I’ve been training for the provincial championship for equestrian riding which is happening a week before the KZN Open so haven’t played as much as I’d like to, but I’ve definitely put in some decent hours in terms of practice and just getting used to my new clubs.”

Price-Moor believes The Woods at Mount Edgecombe will be a fantastic host venue and is of the opinion that the course won’t be particularly physically-taxing for his fellow competitors.

As for what will constitute a successful event from a personal standpoint, Price-Moor is striving for consistency with hopes of being in the upper-reaches of the leaderboard come the conclusion of the 36-hole event.